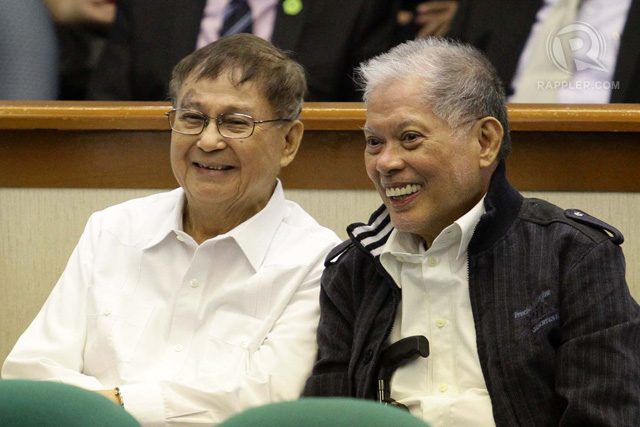 Facebook Twitter Copy URL
Copied
The Senate blue ribbon subcommittee's probe into alleged corruption by the Binay family is like an 'inquisition,' harking back to Martial Law times, says former Senator Rene Saguisag
MANILA, Philippines – Two of the Senate’s most prominent legal eagles returned to the chamber to warn neophyte senators that their probe into the Binays was becoming reminiscent of Martial Law.

Former senators Joker Arroyo and Rene Saguisag, long-time allies of Vice President Jejomar Binay, showed up to support the Vice President’s family and observe the Senate hearing into corruption allegations against the Binays on Thursday, January 29.

Arroyo and Saguisag said they were satisfied that the Senate blue ribbon subcommittee decided to free the Vice President’s son, Makati Mayor Jejomar Erwin “Junjun” Binay Jr, after citing him in contempt. Yet they criticized the lack of due process in the probe.

“When Ninoy Aquino was charged in a [partial] military tribunal, he said he can’t continue participating. I think that’s why Junjun did not participate in the Senate hearing,” Arroyo said in a press briefing after the hearing.

Arroyo was a representative of Makati, the Binays’ bailiwick. He has been a vocal critic of President Aquino despite his ties with the chief executive’s mother.

Arroyo, Saguisag, and the elder Binay were human rights lawyers during the Marcos dictatorship. They belong to the lawyers’ group Mabini. Saguisag said members are now concerned about supposed human rights violations in the Senate investigation.

Saguisag supported the position of Mayor Binay that resource persons are entitled to get a list of questions before they attend hearings. The subcommittee denied Mayor Binay’s requests for questions.

The Senate is investigating various corruption allegations against the Binays, including allegedly overpriced buildings in Makati, a lavish estate in Batangas, and supposed dummies and kickbacks in their leadership of Makati for over two decades.

The leading candidate for the 2016 presidential polls, the Vice President refuses to face the inquiry and instead rejects it as politically motivated. His critics senators Antonio Trillanes IV and Alan Peter Cayetano are part of the subcommittee. Mayor Binay to testify if…

Mayor Binay said he refuses to be put on the hot seat without being given the questions ahead of time to prepare.

Asked if he will attend the hearing if questions are given beforehand, Binay said: “Definitely. But it is not the job of the Senate to find out if we are guilty or not. That is the job of the courts.”

Binay reiterated that he is only after “equal treatment,” saying senators did not hold in contempt “lying” witnesses like his political rivals, former Makati Vice Mayor Ernesto Mercado and lawyer Renato Bondal.

The mayor said he already learned his lesson from attending the first hearing in August 2014.

“There was a cake and all sorts of allegations. Will I allow myself to sit there and be the target of accusations without preparing myself?”

Saguisag supported the mayor’s position, saying based on his experience, Senate staff always coordinated with resource persons to avoid “surprises.”

He called the probe an “inquisition.”

Arroyo again called on senators to revisit their rules to prevent a repeat of the situation where only two senators, not a majority of the 20-member committee, cited Mayor Binay in contempt.

“We are disturbed by the downgrading of governance. There is a tendency to forget rights and to trample on the rights of citizens,” Arroyo said.

Arroyo said the Senate must not prejudge the Binays.

“Vice President Binay and Mayor Binay are already judged as guilty. If you are the judge, you must be a neutral party.” Senator Aquilino Pimentel III, the chairman of the subcommittee, took exception to the comments of the two former senators. In the hearing, he told Binay the Senate gave him the opportunity to respond but the mayor refused to participate.

The Pimentels and Binays were long-time allies until ties soured when the Vice President chose Pimentel’s rival, former Senator Juan Miguel Zubiri, as part of his Senate slate in 2013 despite allegations Zubiri cheated Pimentel of a Senate seat.

“[Martial law] is a wrong analogy. Unfortunately, the Pimentel family was also a victim of the Martial Law era. I don’t see it being implemented in the blue ribbon subcommittee,” Pimentel told ANC.

Pimentel addressed the alleged violation of Mayor Binay’s rights. He hinted that Binay should just go to court.

“Convince us first of the existence of his rights. It’s another thing if he is talking about imaginary rights. Bring it to a referee. We also know how to read the law,” quipped the bar topnotcher. – Rappler.com