AFP chief: We were there to extricate SAF, not fight

Feb 4, 2015 5:25 PM PHT
Carmela Fonbuena
Facebook Twitter Copy URL
Copied
Armed Forces chief General Gregorio Catapang Jr says he and other high-ranking military generals were told about the SAF operation as early as December 2014 but they expected a tactical coordination prior to the actual operation 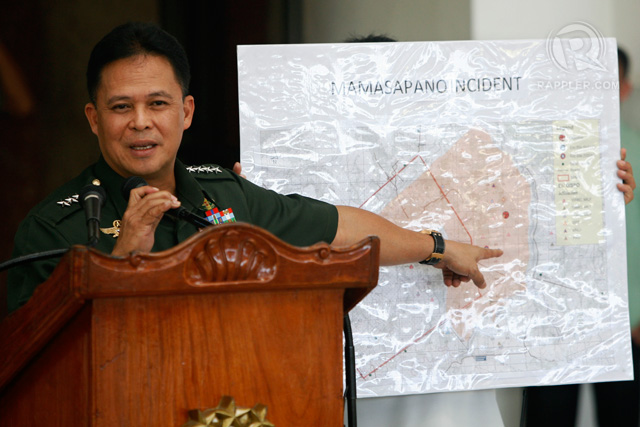 MANILA, Philippines – Armed Forces chief General Gregorio Catapang Jr said on Wednesday, February 4, that soldiers immediately rushed to Mamasapano town in Maguindanao as soon as they heard about the firefight between elite cops and rebel forces on January 25.

But the military troops were not meant to join the fighting.

He said troops have been there as early as 9:25 am to link with Philippine National Police Special Action Force troopers  (SAF) deployed along the highway for road security.

“On or about 9:25 am, troops of the 23rd and 14th mechanized and 62nd DRC linked up with the elements of the 45th SAF troops at vicinity Tukanalipao,” said Catapang.

It was already 11 pm on January 25 when the Army was able to extract the survivors of the 84th SAF company, tasked to neutralize top Jemaah Islamiyah terrorist Zulkifli bin Hir or “Marwan” and Abdul Basit Usman.

They were found carrying with them the “sample” that will confirm the identity of their slain target in Mamasapano, which is believed to be Marwan.

Rappler earlier published an account of how the military responded to help the SAF on January 25. We are highlighting in this story new details that are not in our earlier timeline. (READ: Inside story: SAF kept the military out of the loop)

’45th SAF should have led the way’

“We were expecting the 45th SAF (the troops on the highway) will be the one to lead us because they should know where the position of 55th SAF and the 84th SAF were,” said Catapang.

Philippine National Police Officer-in-Charge Deputy Director General Leonardo Espina said in another news briefing that he received a text message from Napeñas at 5:30 am on January 25 to inform him about the firefight, and he texted Guerrero to ask for reinforcement.

The SAF also also asked for artillery support, but the military claimed that the grid coordinates were not reliable.

War is not a party

Catapang scored how the SAF failed to coordinate with the military. There were several military units – among them the 45th Infantry Battalion and artillery units – around the area but the military chief said it’s not so easy to rush to the encounter site.

Napeñas defended the decision to coordinate with the military only when the SAF troops were already locked in a firefight with rebels in Mamasapano. He said he sent a text message to the chief of the 6th Infantry Division, Major General Edmundo Pangilinan, around 5 am or after the 84th SAF reported they neutralized Marwan at 4:15 am.

Catapang blamed the lack of coordination for the death of the 44 SAF commandos.

Asked about SAF’s concerns to keep the operation a secret to prevent leaks, he said: “Well, thats the fog of war. You have to really balance all these things. What they did was a law enforcement operation. They can just come in and be able to [exit] but unfortunately their plan to exfiltrate before being seen by the various forces here failed.”

He added, “I think that’s the price we have to pay for not having a well coordinated plan on how to support them.”

Catapang confirmed there have been a number of operations against Marwan. High-ranking military generals also learned about the particular SAF operation in December 2014 and the military was supposed to have a supporting role.

But he said a tactical coordination was supposed to be held before the operation was launched, which requires at least a week of preparation.

“We expected that there will be a tactical planning so that we will know. If they have an engagement or they are beleaguered, we will know where to come in to provide the air support, artillery support, the ground troops. These details will take a while,” said Catapang.

“The area is really is hard to manage. Marshland ito, and then we have to come in in full force. And then of course there was ongoing negotiation for  ceasefire. Pumasok na rin ang CCCH (The CCCH had to come in). So we want to give primacy to that ceasefire agreement. It took time to tell everyone to put a stop to the fighting,” Catapang said.

The AFP has completed its inquiry on the Mamasapano incident clearing its troops of lapses in assisting the SAF troopers.

Catapang acknowledged that the Mamasapano incident has strained the relationship between the military and the police.

“I think this is something that we have to look into and we have to look back on the joint aggreement on the conduct of AFP and PNP operations,” Catapang said. – Rappler.com