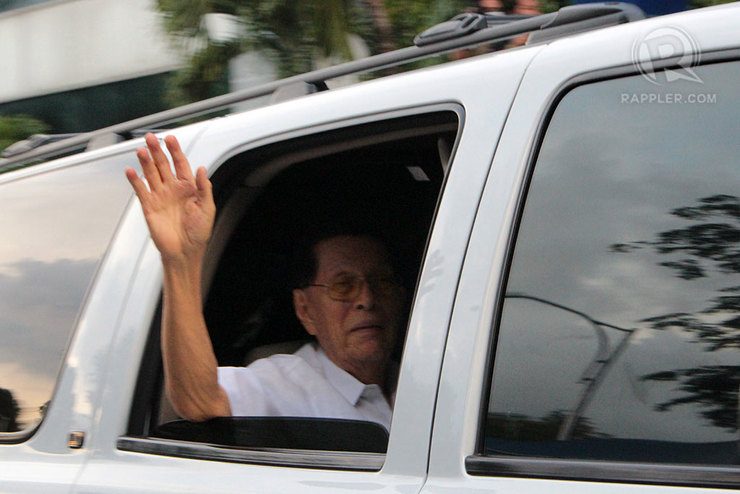 Facebook Twitter Copy URL
Copied
Minority senators visit their detained leader Juan Ponce Enrile, who tells them: 'Don't use this hearing to hit the administration and to gain mileage'

MANILA, Philippines – Opposition senators visited their leader, Senator Juan Ponce Enrile, in detention ahead of the Senate inquiry into the Mamasapano clash.

Ejercito told Rappler that the detained Senate minority leader advised the senators on how to handle the Senate probe into the clash that put President Benigno Aquino III under heavy criticism.

“He said, ‘Don’t use this hearing to hit our political adversaries, the administration, or to gain political mileage because the people are outraged. People would really want to get to the bottom of it so keep in mind that what you want to find out is the truth,’” Ejercito said in a phone interview.

“He said it is better for us (in the minority) to remain quiet about the issue and just keep on working because there could be deep implications,” Sotto said.

Enrile, and Senators Jinggoy Estrada and Ramon “Bong” Revilla Jr have been in detention since June 2014 as they face plunder charges over the pork barrel scam. The 3 are accused of siphoning development funds meant for the poor to bogus non-governmental organizations in exchange for multi-million peso kickbacks.

Sotto said the visit was not meant to be political.

“We visited because it’s almost [Senator Enrile’s] birthday. All talks were incidental.”

A controversial lawyer, politician and martial law administrator during the Marcos dictatorship, Enrile will celebrate his 91st birthday on February 14. (READ: At 90, Enrile a bundle of contradictions)

Ejercito said that the minority bloc meant to show their “moral support” for Enrile as he faces trial. He said the minority visits Enrile “once in a while.”

The neophyte senator said Enrile appeared to be in good health despite his age and illnesses, and remained updated on current events.

“He has been reading a lot, daily.”

Ejercito said the Senate minority will participate in the hearing but does not yet have a stand on the issue.

The senator said Purisima should still face the Senate probe even if he already resigned. Aquino told the Cabinet about his resignation Thursday afternoon.

Yet Ejercito, who has had a long-running rivalry with his brother over San Juan politics, was not part of the group.

“I had to go somewhere else,” he said. – Rappler.com