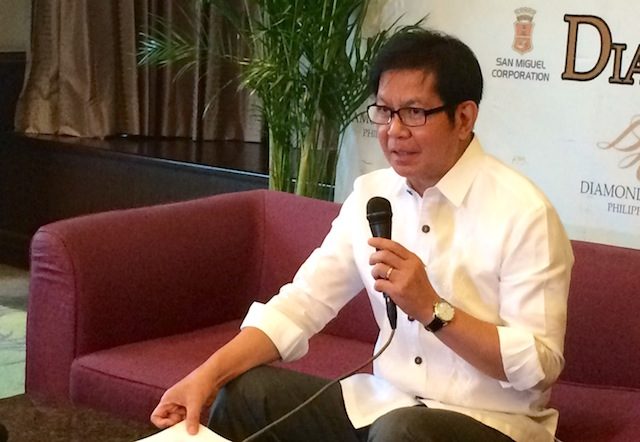 When reporters asked about his political plans, Lacson said during the weekly Kapihan sa Diamond press conference on Monday, February 9, that he is still considering his options.

Lacson ran for president in 2004. He placed 3rd behind the late actor Fernando Poe Jr and then President and current Pampanga Representative Gloria Macapagal Arroyo.

What will make him decide to run? Instead of providing a direct answer, Lacson turned philosophical. He said it would depend on whether a “fork in the road” would open up and show him the way.

“Between now and October (filing of certificates of candidacy), there will be many developments. There are two aspects: the desire to go for it, and ‘Are you acceptable?'” Lacson said.

Monday was Lacson’s last day as the rehabilitation czar for post-Super Typhoon Yolanda (Haiyan) recovery efforts after he stepped down from the post due to the constraints of the position.

With more free time, the former senator is weighing whether he would have a better shot at the Senate again or the presidency.

“It depends on divine guidance. But if you ask me if the passion to discipline the bureaucracy is still there, it’s still there. But the issue is acceptability. If you are not destined, then…. I’m fatalistic. There are so many things that need to be done to get there,” Lacson said.

“I’m not into local politics. Local politics is difficult. There are many compromises that you have to do even if you don’t want to. I’ve seen it up close because I have friends who are governors. I can’t do what they do.”

Forgive but not forget

While still a senator, Lacson went into hiding to evade murder charges filed against him in connection with the 2000 killing of publicist Salvador “Bubby” Dacer. The testimony of former police officer Cezar Mancao helped strengthen the case against him.

However, the Court of Appeals dismissed the murder case against Lacson in 2011 after declaring Mancao an “incredible and unworthy witness” due to contradicting testimonies.

Mancao escaped from the National Bureau of Investigation (NBI) in 2013, but on Saturday, February 7, he gave indications in a radio DZBB interview that he is willing to surrender.

Lacson said he has forgiven all those who had a hand in the case filed against him – from Mancao up to former President Arroyo. (READ: Erap to Mancao: Face charges; Lacson: ‘Forgiven’)

“I will never forget their names, but I have already forgiven them a long time ago,” Lacson said.

Lacson delivered his last speech as head of the Office of the Presidential Adviser for Rehabilitation and Recovery on Monday.

In his speech, Lacson reiterated his earlier stand that the mandate of the National Disaster Risk Reduction and Management Council (NDRRMC) should be strengthened. Lacson is set to submit a transition plan to Malacañang and a proposal for a permanent disaster agency to Congress before stepping down Tuesday.

One of his main proposals is to detach the Office of Civil Defense (OCD) from the Department of National Defense and place the OCD directly under the President.

But Lacson had complained that his ad hoc mandate was not enough to implement a comprehensive rehabilitation strategy, especially since he was powerless over how the P171 billion Yolanda rehabilitation plan would be used. – Rappler.com