Feb 9, 2015 8:03 PM PHT
Facebook Twitter Copy URL
Copied
In the Senate probe, police and military generals explain why hundreds of other SAF commandos and soldiers nearby were unable to rescue the cops trapped in a firefight with the Moro Islamic Liberation Front 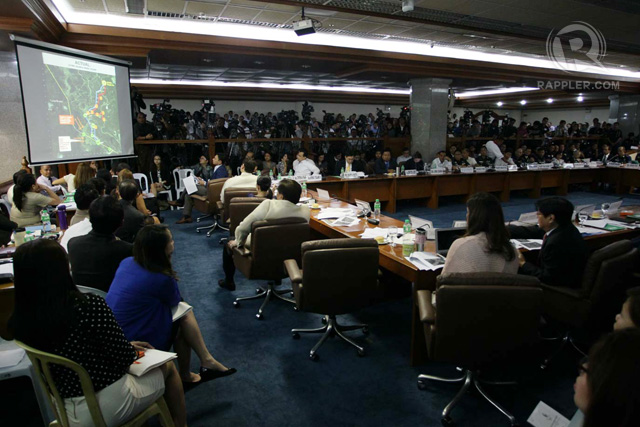 MANILA, Philippines – The first day of the Senate probe into the death of 44 Special Action Force (SAF) commandos turned into a face-off between relieved SAF commander police director Getulio Napeñas and military commanders whom he accused of failing to reinforce his beleaguered troops on January 25.

Senator Grace Poe asked the SAF commander to explain why hundreds of other SAF commandos in the highway were unable to help their comrades. Senator JV Ejercito also asked why the military was unable to provide air support. The two senators echoed the questions raised in the blame game between cops and soldiers.  (READ: Inside Mamasapano: Whe the bullets ran out)

Napeñas was adamant in telling senators that the January 25 operation could have ended very differently if only the military, which had better equipment than the police, provided reinforcement.

He belied the military’s claims that the SAF did not provide grid coordinates that would have allowed them to provide artillery support.

Napeñas noted the impact of the white phosphorous that the military fired at 6:30 pm before troops went in to save and extract the other team of SAF commandos.

Senator Grace Poe turned the tables on Napeñas when she asked why the 300 other SAF commandos in the highway were unable to rescue their beleaguered comrades.

Why no air support?

It was Armed Forces chief of staff General Gregorio Catapang Jr who explained to Ejercito why the Philippine Air Force could not fly its attack helicopters to provide air support.

Catapang spoke of the dangers of the situation blowing into a full-scale war if the military hastily joined the firefight. (READ: Inside story: SAF kept the military out of the loop)

How about artillery support?

Napeñas said artillery fire would have helped the 55th SAF the way it helped the other group of SAF commandos later that evening.

He told senators he wished the survivors among the SAF Seaborne unit could testify how the enemies dispersed and were frightened by the white phosphorous that the military fired at their location.

The military timeline showed that chief of the Army 6th Infantry Division, Major General Edmundo Pangilinan, immediately sent troops and tanks but did not approve artillery support pending the availabity of “complete” information on the firefight.

It was Catapang who explained why. “Nagkaroon kami ng experience na nagkaroon ng friendly fire. Hindi kami kaagad makabigay ng artillery fire because of those circumstances,” he said. He was referring to an incident last year where Marines in Sulu fired at an Army detachment, killing 6 elite Light Reaction troops.

It appears the SAF was only able to provide the first, the location of the SAF troopers. Catapang told reporters after the Senate hearing that what they were given were hours-old grid coordinates that could not be used in a running gun battle.

The military said the absence of proper coordination prevented them from preparing contingency plans to assist the SAF. But Napeñas stressed the need to keep the operation a secret even from the military because he feared that the operation would leak and the target would be warned. – Rappler.com