Why Roxas, Espina out of loop? ‘Operational safety’ – Purisima 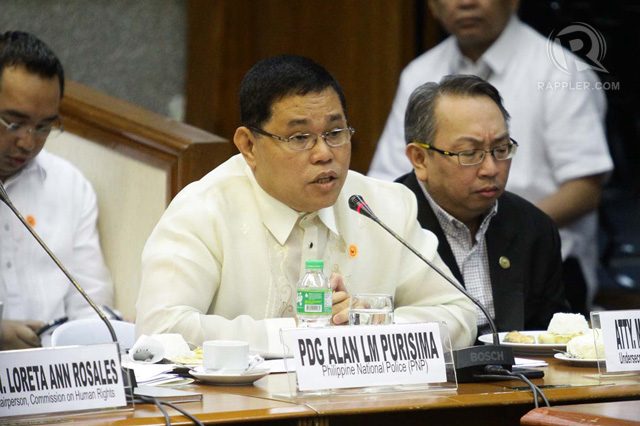 MANILA, Philippines – Former Philippine National Police (PNP) chief Director General Alan Purisima on Tuesday, February 10, said he had “advised” a police general to keep the PNP Officer-in-Charge and the Interior Secretary out of the loop in a high-level operation to maintain “operational security.”

Purisima, who resigned last week as PNP chief, is under fire for his apparent role in “Oplan Exodus,” a January 25 operation to neutralize bomb-makers Zulkifli bin Hir, better known as “Marwan,” and Abdul Basit Usman.

The following is the exchange between Senator Ferdinand Marcos Jr and Purisima   on the latter’s rationale for keeping the two officials out of the loop in the important mission, on the second day of the Senate hearing on the Mamasapano clash.

Senator Ferdinand Marcos Jr: I would like to know the reason. Why did you feel there was a need to cut out General Espina from the chain of command?

Purisima: Your honor, the operation said it should be time on target for everybody so I just followed the principle.

Marcos: But this is the acting chief of the PNP. It is not only a usurpation of authority, it’s also breaking the chain of command! And you, as a suspended PNP chief, were issuing orders to keep the acting chief PNP in the dark on a very critical mission. Why did you feel that was necessary?

Purisima: I did not give any orders; I gave advice.

Purisima, a close friend of President Benigno Aquino III, provided the “intelligence packet” for what would eventually be “Oplan Exodus.” Despite his suspension, however, Purisima still sat in meetings with the SAF leadership and even the President himself.

One of those meetings happened in Bahay Pangarap, the official residence of the President in Malacañang.

On Tuesday, Purisima stuck to his guns, insisting he was only following the SAF’s plan, which was crafted based on intelligence gathered by the PNP.

Marcos would not take Purisima’s explanations sitting down.

Purisima: Hindi po ganoon. Ang nakasaad sa plano ng PNP SAF ay time on target. (It’s not like that. What is stated in the PNP SAF plan is time on target.)

When it was Senate President Franklin Drilon’s turn to ask Purisima questions, he again pounded on the reasons behind Purisima’s “advice.” The PNP chief insisted he was only following the SAF’s plans.

“I give up,” an exasperated Drilon told Purisima.

Purisima, however, clarified that although he gave his “advice” following a briefing with the President, Aquino was not privy to this.

Napeñas confirmed the same, but added he took the lack of opposition as the President’s “implied approval” of the mission.  – Rappler.com