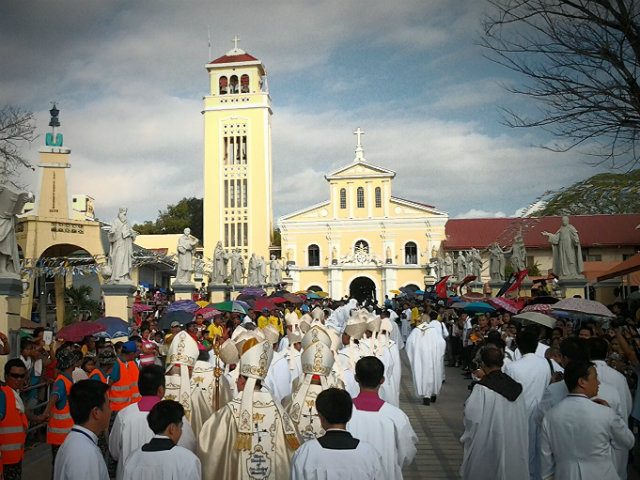 Facebook Twitter Copy URL
Copied
The Manila archbishop says, 'We see God in the basilica, but do we see God in our neighbors – the hungry, the thirsty, the naked, the homeless, the prisoners?'

PANGASINAN, Philippines – It was a debut fit for a queen.

The Vatican’s ambassador to the Philippines, 3 of 4 Filipino cardinals, and the local archbishop, who also heads the Catholic Bishops’ Conference of the Philippines, led dozens of bishops and priests in a Mass to proclaim Manaoag Shrine a basilica.

Pope Francis gave the title “minor basilica” to Manaoag Shrine in Pangasinan, or the Shrine of Our Lady of the Rosary of Manaoag, in October 2014. By doing this, Francis granted special privileges to the centuries-old church and its churchgoers.

On Tuesday, February 17, hundreds of devotees of the Lady of the Rosary of Manaoag celebrated this title in the Mass at the “pilgrim center of the north.”

Manila Archbishop Luis Antonio Cardinal Tagle considered the event not only a debut, however, but also a send-off party for devotees. Echoing Pope Francis, he challenged them to go out of the church’s edifice, into the world’s peripheries.

“The proclamation of a parish church as a minor basilica is truly a sign of the Church’s recognition not only of the deep history of the parish but also its spiritual patrimony. It is an honor granted by the Church not to many parish churches. But with the honor comes a mission,” Tagle said in his homily on Tuesday.

Honored by the Vatican

The shrine’s “deep history” began in 1600, when the Augustinians built a chapel in Manaoag, then turned it over to the Dominicans in 1605.

It continued through the centuries with the construction of a larger church in 1701, its expansion, and the damage it sustained after an earthquake in 1892 and a fire blamed on revolutionaries in 1898.

The “spiritual patrimony” is the devotion the shrine has inspired. Manaoag Shrine houses the centuries-old image of Our Lady of the Rosary of Manaoag, which Catholics believe is miraculous.

This has caught the Vatican’s attention for decades.

In 2011, Manaoag Shrine was granted a “special bond of spiritual affinity” with the Papal Basilica of Saint Mary Major in Rome. Lingayen-Dagupan Archbishop Socrates Villegas, who oversees Manaoag Shrine, explained that “the spiritual benefits that you can gain by visiting the papal basilicas, you can also receive by visiting the Shrine of Manaoag.”

One of these benefits is a plenary indulgence, which Paul VI defined as “the remission before God of the temporal punishment due sins already forgiven as far as their guilt is concerned.” The shrine’s recent title of minor basilica comes not only with the blessings of a plenary indulgence, which is granted when visitors confess their sins, receive communion, and pray for the Pope’s intentions.

It also gives the basilica the right to use the papal symbol of crossed keys on its banners, furnishings, and seal.

This makes Manaoag Shrine more prominent among Catholics. It shares the title of minor basilica with churches such as the Manila Cathedral and Quiapo Church. (The Catholic Church has only 4 major basilicas, all found in Rome.)

In his homily during this Mass, Tagle explained that a minor basilica is “an effective symbol of God’s desire to dwell among His people.”

“There are many reminders that God is with us. But a home such as basilica wields a different kind of influence on people. In places like the Basilica of Our Lady of the Rosary of Manaoag, many children come home, cry, vent their feelings, seek forgiveness, ask for help, give thanks, and say their praises,” Tagle said in Filipino.

He pointed out that this “house of God and house of prayer” poses a challenge: “What am I doing to be the presence of God for others?”

“I hope we can open our eyes. We see God in the basilica, but do we see God in our neighbors – the hungry, the thirsty, the naked, the homeless, the prisoners? Let us remember, our salvation depends on whether we see God in them,” Tagle said.

“May people see God in us, and may we see God in people, even in enemies. Love your enemy,” he told the crowd.

He said: “Do we pray for the suffering, the hungry, the sick who don’t have money? Do we think of them, or does it happen that even in prayer, it’s all ‘me, me, me’! In ordinary life, ‘Me!’ In prayer, ‘Me!’ How much we pray for others in comparison to the prayers for ourselves?”

The cardinal repeated this critique of “individualistic” prayer in another homily in Manila on Ash Wednesday, February 18.

Closing his homily in Manaoag, Tagle quoted the Gospel passage on Mary’s visit to her cousin, Elizabeth, as Mary carried Jesus in her womb.

“We visit Mary in this church, and that is okay. But you know, in the Bible, it’s not Mary who was visited. It was Mary who visited. I’m not saying you shouldn’t come here. You should, you should,” the cardinal said.

“But after visiting Mary, imitate Mary: Go! Go! Visit the poor, visit the needy, like Elizabeth,” he added.

“People who visit here will be visited by God. But when you are visited by God, you have to go on mission to visit other people, bringing God and God’s Word to them.” – Rappler.com