Will the President’s crisis management style spell his downfall? MANILA, Philippines – It was January 25, when 44 of 392 Special Action Force (SAF) commandos died in the cornfields of Mamasapano, Maguindanao – caught in a clash with Moro rebels as they executed an operation targeting top terrorists.

It was the bloodiest day for the police in recent history, but it took the President of the Philippines almost two weeks before he spoke to Cabinet members about what he knew of Oplan Exodus. It also took him as long to decide to let go of good friend and then-suspended police chief Alan Purisima, who was allegedly in charge of the deadly operation despite his suspension. It was February 5.

It then took him 6 days after that to gather top police and military generals in Malacañang – to do the same – and ask them to present a united front to the public. It was a little too late.

Seven days earlier, sacked Special Action Force (SAF) chief Getulio Napeñas, who was the commander of the operation, held a press briefing pointing to the military’s failure to coordinate with the police – the same day Armed Forces chief General Gregorio Catapang Jr told media about the lack of reliable grid coordinates provided them by the police.

But even immediately after the incident, it took the President almost 48 hours until he finally decided to meet with Interior Secretary Mar Roxas, whose department overlooks the Philippine National Police (PNP). The meeting took place noon Tuesday, January 27, with key Cabinet members in attendance.

It was in that meeting that he was advised to deliver a national address. He agreed – but not until 6:30 pm Wednesday, 3 whole days after the bloody clashes. (READ: TIMELINE: Mamasapano clash)

What took the President so long to speak? Why were there no earlier meetings to unite messaging, exchange details, manage the crisis?

On Tuesday, February 24, Communications Secretary Sonny Coloma defended the President and his decisions in the aftermath of the operation, including his choice to stay silent following the incident – pointing to Aquino’s “deliberate” crisis management style.

“There are those who ask him, ‘Why did you wait for such a long time before speaking?’ But you’ve covered [him] for 4-and-a-half years,” Coloma told Malacañang reporters. “By now you understand the character and personality of our President – he doesn’t rush. He is very deliberate especially when it comes to finding out important facts and truth.”

Coloma added, “He wanted to find out first because this is a delicate issue, the peace process is getting affected. He did not want to speak about anything when he wasn’t sure of relevant facts. So I hope we understand what happened in that context.”

The President himself on Tuesday, in a speech to the youth, admitted that “what happened in Mamasapano” is a challenge.

But could one of the biggest – if not the top – crises to hit the Aquino administration been less of a blow to the government had the President handled the aftermath of the failed operation differently? Coloma compared Aquino’s handling of Mamasapano with how he dealt with the Supreme Court decision on the administration’s economic stimulus package, the Disbursement Acceleration Program (DAP) – which was declared partly unconstitutional.

“For example, the decision of the Supreme Court with DAP, he read that first. It was not until July 15 or a full two weeks after the promulgation of the decision before he spoke because he made sure first, he read the decision, he read all the concurring and dissenting opinions,” Coloma said.

“That is his leadership style: He is deliberate, he is purposive, he does not jump to conclusions.”

But is it that refusal to make conclusions, or something else that spurred Aquino’s silence both times?

According to a Palace source familiar with Aquino’s decision-making, rather than “deliberation” as described by Coloma, the commonality between the President’s handling of DAP and Oplan Exodus, the source said, was more in Aquino’s “same reaction of denial.”

As with DAP, the source said, the President refused to admit wrongdoing, even addressing the nation to slam the High Court’s decision. It was a speech that wasn’t taken kindly by the public – much like Aquino’s first address following Oplan Exodus.

At that time, Senator Serge Osmeña, an ally of the president, also slammed Aquino’s handling of DAP, calling it “lousy” and “really bad.”

“That was childish. A referendum cannot overrule the Supreme Court. The SC is the final arbiter of what is legal, constitutional. There is no higher authority than the SC. We have to respect that. There is this saying that the Supreme Court is right even when it is wrong. Many times I’ve disagreed with the SC but once they’ve spoken, we have to respect it,” Osmeña said.

The source also questioned why Napeñas was sacked so quickly, when the President was supposedly not jumping to conclusions.

Another similarity between the Mamasapano operation and DAP, is that Aquino kept only a few people in the loop. The President’s tendency to put supreme trust in long-standing friends has more than once proved problematic – DAP was also one of the biggest crises to hit the government.

When the controversy surrounding DAP first came out, some of the men closest to the President inside Malacañang were just as surprised as the Filipino public. Allegations of bribery and senators receiving millions of pesos of DAP funds for projects not part of the General Appropriations Act also caught administration officials off-guard, because while they knew about DAP, only a handful of Liberal Party officials, including good friend and Budget Secretary Butch Abad, knew of the details.

Similarly, after the Mamasapano operation, it was revealed that while Purisima, who was then suspended on graft charges was very much in the loop. PNP OIC Deputy Director General Leonardo Espina and Roxas were not. 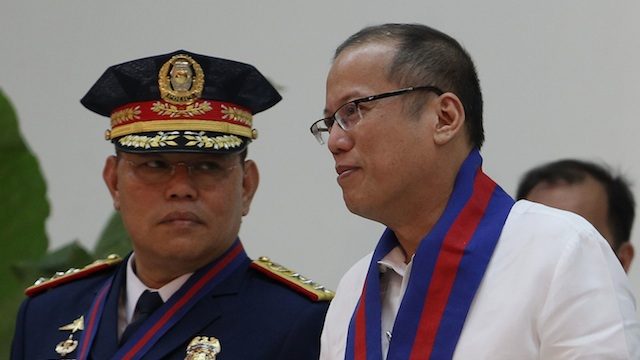 The President has close ties with Purisima, who was appointed top cop by Aquino in 2012. As aide of the late president Corazon Aquino, mother of the President, he was a member of the Presidential Security Group and was assigned specifically to guard the young Aquino, who would later become president too.

His siding with Purisima is also reminiscent of another instance – how he handled Interior Undersecretary Rico Puno, an old shooting buddy, who was put under the spotlight for bidding anomalies involving the PNP. Aquino stood by Puno until he was ultimately forced to ask his friend to resign. With DAP too, Aquino has fiercely defended Abad throughout.

Even when the President announced his acceptance of Purisima’s resignation, Aquino praised his old friend and thanked him for his service, admitting the decision to let him go was “painful.”

After narrating the basis of his long friendship with Purisima, Aquino said in Filipino: “For this reason, perhaps you will understand why I find it painful to see him leave the service under these circumstances. I have accepted, effective immediately, the resignation of General Purisima. I thank him for his many years of service prior to this tragedy.”

When the President did finally address the nation, his message was not well met by netizens.

In his speech, Aquino blamed Napeñas for not heeding his advice to coordinate with the military. After his message, he took questions from the media but appeared evasive. Asked if it was him who gave the final go-signal for the operation, he could not answer directly.

The same Palace source told Rappler the Q&A after the first national address was unplanned. The fact that a press conference took place after his address, was yet another sign of crisis mismanagement, said the source, as pronouncements made that day resulted in unrehearsed statements made by the President – and the need for his spokespersons to later attempt to piece together satisfactory answers amid contradictory statements made by other officials afterwards.

During that press conference, Aquino denied Purisima was involved in the operation beyond clarifying jargon. He said Purisima was no longer directly involved after he was suspended for graft charges by the Ombudsman.

On Monday, February 23, text messages between Purisima and Aquino were released, showing Purisima’s role in the operation was much more than Aquino had initially told the country – having been the one receiving updates from Napeñas, and reporting directly to the President.

Osmeña again criticized Aquino’s handling of the crisis this time around, telling radio station dzBB that the President should apologize for committing a “triple whammy,” namely, putting Purisima in charge, failing to course instructions through Espina, and bypassing Roxas and Espina.

Public sentiment further soured when the President skipped the arrival honors of 42 of the 44 corpses of the fallen men on January 29 – a move lambasted in social media and viewed by many as a lack of empathy and leadership.

In a meeting with members of Congress also on Monday, February 24, Aquino explained to those present why he chose to skip the ceremony and attend a car plant inauguration instead. This meeting – a whole month after the deadly operation – was the first with House leaders, to push for the Bangsamoro Basic Law which aims to bring peace between the government and Moro rebels, despite the proposed law being at risk immediately after the incident.

A House member present at the meeting told Rappler, that Aquino told them the choice was again “deliberate” and his own.

“He made a calculated move. He wanted a later opportunity for families to air out the grievances, but the arrival honors were too emotionally charged. It was a conscious decision,” the source said. The choice backfired. While Aquino spent the whole day with families of the fallen cops the day after the arrival honors – as originally planned – it was, in a way, too late. Netizens had already questioned the President’s priorities and wondered why he chose a business event over what was viewed as the most important national concern at the time.

In a Senate probe investigating the incident, other contradictions have ensued including Cabinet security cluster members denying they informed the President of the casualties only to later take it back, raising questions on whether they were covering up for the President. Purisima’s refusal to answer some questions without first consulting Aquino was also met with surprise.

Coloma said the contradictions were due to the fact that the President wanted all to speak freely on what they knew.

“In all this the top priority of the President is to know the truth. He can’t just adapt a posture whereby he would influence what would happen in the hearing. That’s also why he gave officials with information full freedom to accept the Senate and the Congress’ invitations and to serve as resource persons,” he said. “He did not prevent or restrain any official of the Executive branch from giving information.”

But by not gathering top officials as a group and explaining what he knew, or by managing the crisis according to his personality – has he risked his presidency?

The Palace said the President has taken the criticisms in stride, an observation – 3 weeks since the incident – lawmakers in the meeting with him last Monday agreed with.

Rappler’s source in the meeting said of Aquino, “I don’t think he’s affected by criticisms. His attitude is ultimately what I did, I did not do anything bad. But if they want to criticize then let them. Eventually when things come out, I’m going to be saved by that.”

“Even if he is being attacked, he just takes it in stride while he goes through the painstaking process of knowing the entire truth. And once he is aware of it, that is when he will speak and he will explain in full his understanding of the situation,” he said.

Until then, he will stay silent as the public forms its own ideas of what happened and what role he played – even if it may spell his downfall – because that’s just the personality of the President of the Philippines. – Rappler.com