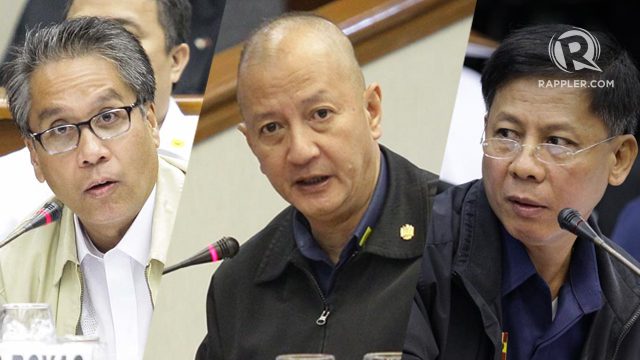 Facebook Twitter Copy URL
Copied
Even as President Aquino was with his top generals in Zamboanga City on January 25, information about Mamasapano came in trickles. These text messages may explain why.

MANILA, Philippines – January 25 started out as an ordinary day for Interior Chief Manuel Roxas II, who was scheduled to fly to Zamboanga City with the President and other security officials to check the security situation in the area.

But as the day progressed, Roxas and Philippine National Police (PNP) officials would slowly learn about a top-secret police operation in Mamasapano town that would end up as one of the bloodiest one-day operations in the police force’s young history.

Yet, even as President Benigno Aquino III was already with his top generals in Zamboanga City at 10 am of January 25, information about the Mamasapano incident came in bits and pieces throughout the day. (READ: Aquino’s crisis management style in Mamasapano)

In previous Senate hearings on the carnage, lawmakers questioned why security officials in Zamboanga did not huddle immediately or at least speak openly about the unfolding situation.

One of Aquino’s text messages to Roxas may explain why.

“When discussing the operation against Marwan and Usman direct everyone to discuss in passing or in very general terms the intel operation that led to it. Too many details may be used as clues to how we were able to ferret out these [high value targets],” Aquino told Roxas via text message around noon on January 25.

The intelligence package, according to SAF officials and Rappler sources, came from Aquino’s close friend police general Alan Purisima, who was then serving a suspension order from the Ombudsman. Purisima eventually quit as PNP chief in the aftermath of Mamasapano.

Text messages exchanged between Roxas, former SAF command Police Director Getulio Napeñas, and PNP Officer-in-Charge Deputy Director General Leonardo Espina on January 25 give a glimpse into how officials slowly pieced together a rough picture of the situation in Mamasapano that day.

Roxas, who also chairs the National Police Commission, was kept out of the loop from the operation. Also in the dark was Espina, who took over the 150,000-strong PNP after the suspension of Purisima in December 2014.

The text messages, which were submitted to the PNP’s Board of Inquiry (BOI) and the Senate as part of the two groups’ independent investigations, showed both Roxas and Espina had more questions than answers on January 25.

Although SAF troopers entered barangay Tukanalipao at around 2:30 am, the PNP’s hierarchy and Roxas would only find out about the operation hours later.

In Roxas’ case, he only found out at around 7:35 am, through a text message from Intelligence Directorate chief Police Director Charles Calima, Jr.

The text message to Roxas, quoting Napeñas, said Marwan was neutralized but his body was left behind “due to heavy volume of fire.” At that time, only 1 SAF trooper from the “main effort,” the 84th Seaborne Company, was reported injured.

The message also said the operation’s “containment force,” the 55th SAC, was “engaged 2 km east of Tukanalipao… there was heavy firefight and SAF troops suffered casualties.” The PNP operation update indicated “extraction is ongoing and support from the AFP requested.”

This text message was forwarded by Roxas to the President, who replied “thank you.”

In contrast, Purisima knew of the operation much earlier, even informing Aquino himself at 5:45 am. Purisima also called Espina at around 5:33 am that morning to tell him that Marwan had been killed.

Aquino and the suspended PNP chief would go on to exchange a series of text messages regarding the Mamasapano operation throughout the day, even if the President was with Roxas, Defense Secretary Voltaire Gazmin, and top generals from the Armed Forces of the Philippines (AFP) in Zamboanga city.

Espina, Roxas, and Gazmin were caught off guard by reports of clashes involving the SAF in Mamasapano.

Espina himself was unaware of the situation inside Mamasapano when he asked Western Mindanao Command chief Lieutenant General Rustico Guerrero for help.

Roxas has been criticized by political rival Vice President Jejomar Binay, who said the Mamasapano “massacre” put into question Roxas’ kind of leadership. “Ang sama ho sa person niyan kung hindi pinagkakatiwalaan ng katrabaho mo (It says something about a person when the people you work with don’t trust you),” Binay said in a March 2 radio interview.

Napeñas admitted in previous press conferences and Senate hearings that he had kept Roxas and Espina out of the loop under the “command” of Purisima.

Purisima, who is known to be at odds with both Roxas and Espina, insisted his words to Napeñas were merely “advice” and not orders. Purisima also said the decision to keep Roxas and Espina in the dark was prompted by “operational security.”

The operation has also caused tensions to rise between generals from the military and the police.

Napeñas questioned why military forces were unable to send help right away, while military generals cried foul over the criticisms hurled towards them, insisting that they had too little information to go by the morning of January 25.

“Hostilities in the area are much more than our troops and nearby mixed armed groups were quick to reinforce,” Espina told Roxas in a 10:42 am text message.

“I know ‘fog or war’ effect so please have them sit and ikwento nila sa isang (let them speak to a) professional debriefer/investigator,” Roxas later told Espina past noon in a text message.

It was only confirmed to Roxas and police officials at around 4 pm on January 25 that the AFP was not told of the operation beforehand.

At the end of a long day, Roxas would send Napeñas a final text message at around 7:12 pm, telling him to “keep calm.”

Roxas, Espina, and other security officials would fly to Maguindanao the next day to be briefed by Napeñas in person. It was during the briefing that Napeñas told officials that he had kept Purisima in the loop prior to and during “Oplan Exodus.”

During a Senate hearing on the incident, Roxas told legislators that had he known about “Oplan Exodus” beforehand, he would have consulted Gazmin, a retired Army general.

Information made available to both the media and the public came in bits and pieces.

The President himself initially said Purisima merely served as a “consultant” for the operation. Text messages exchanged the two friends would reveal that Purisima was giving the President updates on “Oplan Exodus.”

Espina, quoting the PNP’s Intelligence Group, told Roxas on January 25 at around 6:30 pm that the MILF’s 105th base command and the BIFF had “blocked the exit of SAF when the troops tried to extricate after hitting Marwan.”

Two companies were in separate areas in Mamasapano – the 84th SAC close to where Marwan’s hut was located and the 55th SAC closer to a residential part of the town, just beyond what is now an infamous bamboo bridge.

The original plan was to only deploy some 252 troopers, Napeñas said in a text message to Roxas.

At around 6:51 pm, or minutes after the AFP shot white phosphorus into the area where the 84th SAC was located, Roxas asked Napeñas: “Of the 392 total [SAF] force… what happened to the balance of 310 or so?”

The former SAF chief answered: “The remaining troops were sent to rescue the persons being pursued by the enemies together with the Army 7 rest were on a buffer zone to prevent the extraction position and exfil (sic) route.”

The AFP had earlier questioned why the 300 or so SAF troopers did not themselves help rescue their beleaguered comrades when the initial reports of firefight came in. – Rappler.com