Binay: Bangsamoro law should not be only option for peace

Mar 4, 2015 6:29 PM PHT
Facebook Twitter Copy URL
Copied
The Vice President admits he has not read the entirety of the proposed Bangsamoro Basic Law but says he has heard some say that parts of it are unconstitutional 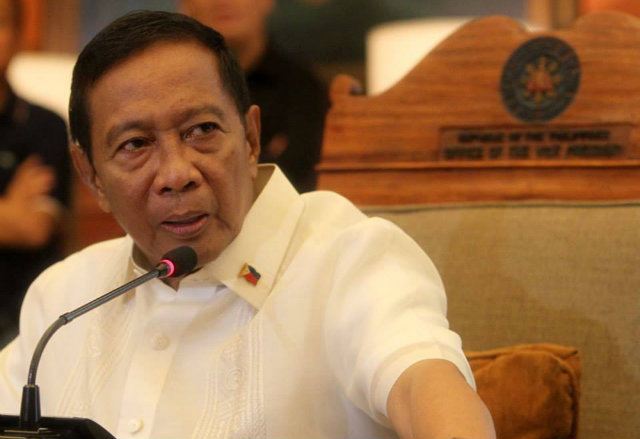 MANILA, Philippines (UPDATED) – The proposed Bangsamoro Basic Law (BBL) should not be the only option towards establishing lasting peace in Mindanao.

Vice President Jejomar Binay made the statement in an interview on Bombo Radyo Dagupan on Tuesday, March 3, when asked if he favored the proposed law.

(Not necessarily the BBL. We should push for all sorts of ways to have peace in that part of Mindanao. It’s not the entire Mindanao that has conflict, only the areas of our fellowmen in the Muslim community.

When asked if he believed that the BBL is unconstitutional, the Vice President, however, admitted that he has not read the entirety of the proposed law.

(I have not read the entirety of that BBL but there are some who are saying that provisions in the Memorandum of Agreement on Ancestral Domain that were declared unconstitutional were included in the BBL. If that is true, that is too much.)

Binay, a presidential aspirant, has repeatedly said that the passage of the measure should not be rushed to beat the target deadline of creating a new autonomous region in Mindanao before President Benigno Aquino III steps down from office in 2016.

Leaders of both chambers on Monday, March 2, agreed on a June timetable to pass the law but not without amending provisions of the measure which they believe to be unconstitutional.

“This is the problem. We have a government peace panel and they have agreed on that, so they entered into this agreement with these provisions. What is happening here is we are once again entering into negotiations,” she said, and referred to the call of Cagayan de Oro Representative and House ad hoc committee chair Rufus Rodriguez to delete certain provisions of the proposed law.

Citing this, Poe said, “We will once again start talking to them to see what is acceptable to them.”

Poe, who chaired the committee that investigated the Mamasapano clash, said the government peace panel was “too generous” in providing concessions.

“That is one of the issues being raised. I don’t want to judge them. I know they did enough research, their resumés are impressive. I know they have institutional knowledge. But that’s what some are saying, that we were too generous. So, I have this opinion. Others also share the same opinion. I’m not the only one comprising the Senate. We all have to give our own opinions,” Poe said.

“It’s now up for Congress to clean up the mess our government negotiators have created. Now let OPPAP (Office of the Presidential Adviser on the Peace Process) and the GPH panel work and impress upon their counterparts that Congress reviewing the draft BBL and amending provisions is fairly part of our democratic process,” Escudero said.

Marcos clarified that the he is not setting any conditions for the resumption of BBL discussions.