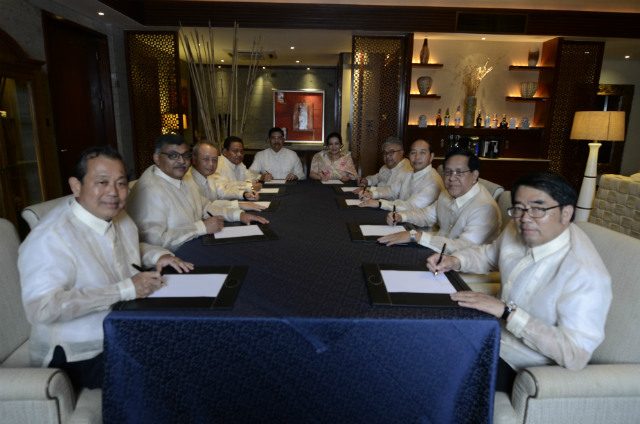 MANILA, Philippines – Judiciary leaders in member-states of the Association for Southeast Asian Nations (ASEAN) signed on Tuesday, March 3, an agreement for continuing judicial cooperation, a vital element as the bloc moves toward full integration.

The agreement was signed on the last day of the 3rd ASEAN Chief Justices Meeting (ACJM) held in Boracay island, a top tourist destination. Each ASEAN member-state was represented.

Dubbed the Boracay Accord of 2015, the agreement reaffirmed ASEAN judiciaries’ “commitment to strengthen international partnerships and regional solidarity.”

During the discussion, the justices agreed to create an English-language portal of laws across the region. (WATCH: ‘Rule of law must prevail as ASEAN integrates’)

The country representatives agreed to focus on “training needs and capacities” of ASEAN judiciaries and to “continue to monitor developments of the regional roundtable on environmental law.”

With the Philippines as host of the 3rd ACJM, Chief Justice Maria Lourdes Sereno led the high-level meeting with her co-equals in the region. (IN PHOTOS: 3rd ASEAN Chief Justices Meeting)

Philippine Supreme Court Spokesperson Theodore Te explained that a clear portal for litigants, understandable court regulations, and a predictable system once cases are filed, are vital to the envisioned ASEAN economic community.

Sereno remains the only female chief justice in ASEAN since 2012, representing a country still struggling to create gender balance in top-level government positions.

The ASEAN economic integration, she said, is ultimately meant “not to serve the governments” but to protect “the common will of the individual” and “uphold human dignity in its various forms.”

Part of the discussion during the 3rd ACJM focused on good judicial practices in ASEAN, including court technology and case management techniques.

Technology upgrade for court services is part of the reform agenda of Sereno, who envisions an automated system, dubbed e-courts, across the country.

E-courts are seen to be less prone to human error and corruption, as court fixers usually step in when the court system lacks a streamlined process where cases can be better monitored.

It, however, demands a greater budgetary allotment for the judiciary. (READ: Sereno wants more funds for faster case disposal)

Sereno also believes there is a long way to go before legal processes can be uniform across the bloc, given existing structural differences.

She suggests a closer look into the gaps of the local legal profession before moving towards liberalization, which allows foreign lawyers to practice in the country.

Appointed relatively young to her present post, the 54-year-old Sereno has 16 more years as chief justice until the mandatory retirement of 70 – a rare and golden opportunity to institute long-lasting judicial reforms.

She is now on her third year as the first female leader of the Philippines’ 15-member High Court.