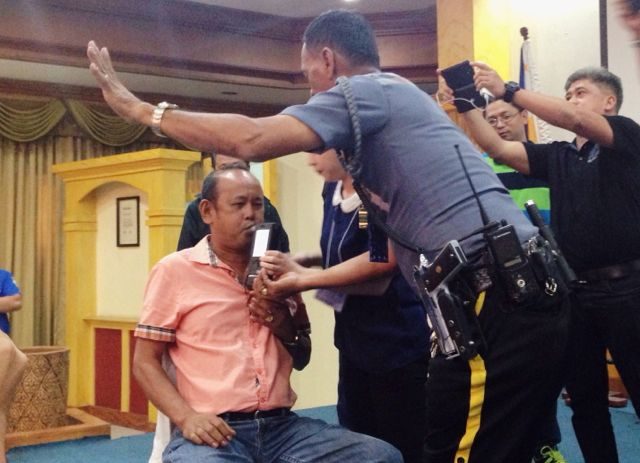 Facebook Twitter Copy URL
Copied
About 100 traffic enforcers from LTO's regional offices, the MMDA, the PNP, and local government units get to test the Fit 333 breathalysers, which they will use starting March 12

MANILA, Philippines – The breath analyzers to be used for the enforcement of the anti-drunk driving law starting Thursday, March 12, are calibrated to Philippine standards and are designed to be user-friendly.

This is according to the supplier of the device and which the traffic enforcers deputized by the Land Transportation Office (LTO) found out for themselves in a training session on Tuesday.

Alexander Sevilla of Philippine Blue Cross Biotech Corporation, the supplier of the Fit 333 breathalyzers, spoke to around 100 personnel from the LTO’s regional offices, the Metropolitan Manila Development Authority (MMDA), the Philippine National Police Highway Patrol Group, and local government units gathered at the LTO office in Quezon City for a 3-day workshop for the enforcement of Republic Act 10586.

RA 10586, or the Anti-Drunk and Drugged Driving Act of 2013, seeks to penalize drivers whose blood alcohol content (BAC) exceeds the allowable legal limit.

For non-professional drivers, their BAC should not exceed 0.05%. Professional drivers and drivers of public utility vehicles (PUVs), however, must have no trace of alcohol at all – anything higher than 0% will be subject to penalty.

The LTO and its deputized personnel will begin breath analyzer tests on motorists suspected to be driving under the influence of alcohol starting Thursday.

The Fit 333 breathalyzer uses a platinum fuel cell that reacts specifically to the presence of alcohol, and will not be affected by external or environmental factors, Sevilla said.

It is also already calibrated according to the Philippines’ legal BAC limit of 0.05%. Aside from showing the BAC reading on the screen, the unit will also display a green, yellow, or red icon, so traffic enforcers can determine at a glance if the reading fails or passes the allowable legal limit.

Some officers, however, pointed out that the color-coded icons are misleading if the tests were done on PUV drivers, since the limit for them is 0%.

Even if the icon is green – meaning the BAC reading is below 0.05% – the PUV driver is still guilty of violating the law if his or her BAC shows a reading other than 0%.

Sevilla said that this would be rectified in the next batch of breathalyzer units, but admitted that it has already been pre-programmed in the first batch of 150 units to be used for the pilot run on Thursday.

He stressed, however, that officers should rely on the BAC reading rather than the color-coded icons.

During the workshop, the LTO’s deputized personnel were taught how to prepare and use the breathalyzer.

Apprehended motorists should blow into the mouthpiece for at least 6 seconds. The device will then come up with the results after a few seconds. The traffic enforcer can then save the result, encode the name of the driver and other information, and then print the BAC results on thermal paper.

To make sure the units are working well, the devices must be calibrated every 6 months or after 2,000 tests, whichever comes first.

With the strict enforcement of the anti-drunk driving law just two days away, LTO traffic safety division chief Daisy Jacobo stressed the importance of following the law to the letter.

After some officers raised concerns about the possibility of catching influential personalities who would challenge the law enforcers’ actions in court, Jacobo said it’s important that every step of the process is properly documented.

She added: “Mabigat itong gagawin ninyo, hindi basta-basta. Kailangang i-dokumento ninyo, pag-aralan ninyong mabuti.” (This task is difficult. You have to document the process, and study the law carefully.) – Rappler.com