Duterte is No. 3 in presidential preference poll 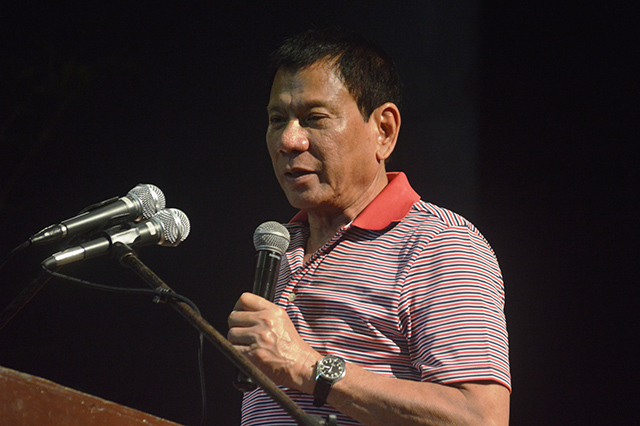 The tough-talking Duterte has been pushing for federalism, saying it will help solve the peace and order problem in Mindanao, the Philippines’ poorest island group that has been plagued by a 4-decade-old Muslim secessionist movement.

The two are tied at 3rd place after front runner Vice President Jejomar “Jojo” Binay, who garnered 29%, and Senator Grace Poe, who got 14%.

Binay’s 29% is 3 percentage points higher than his 26% in November 2014. Since that time, he has been linked to corruption scandals in Makati, including the alleged overpricing of the Makati City Hall parking building.

The survey had a sample size of 1,200 and an error margin of ±3%. The error margin indicates a marginal increase for Binay and a marginal decline as well for Poe. But because they moved in different directions, Binay is “now significantly ahead,” according to Pulse Asia.

Binay’s spokesman Rico Quicho said the survey results reaffirm the “people’s desire for a competent and experienced leader to lead the country forward. Despite the never-ending attacks by political opponents on the accomplishments of the Vice President, the people have come to understand and accept that all these are just loose allegations without any basis in fact and in law.” 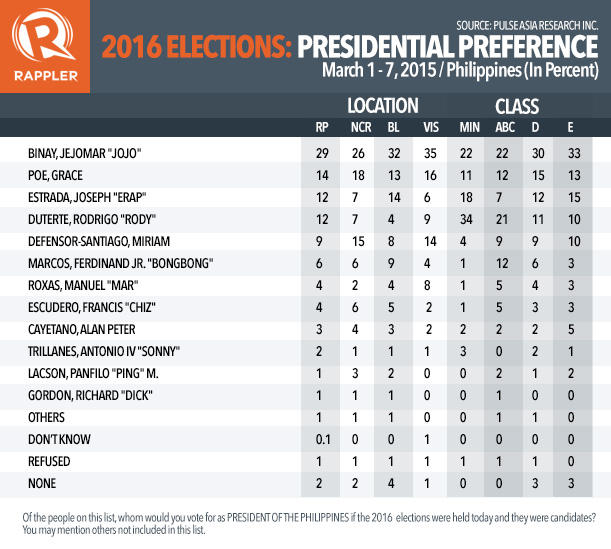 The survey comes after the bloody Mamasapano clash on January 25. The encounter resulted in the death of 67 people, including 44 Special Action Force troopers, 5 civilians, and 18 Moro Islamic Liberation Front rebels. Subject of various investigations, the massacre was seen to be the worst political disaster to face the Aquino presidency.

Senate investigations led by Poe, who is chair of the Senate committee on public order and dangerous drugs, showed that the President “must bear the responsibility” for the botched operation. Investigations also revealed that Interior Secretary Manuel Roxas II was kept out of the loop. Binay seized the offensive, saying that the Mamasapano incident raises questions about Roxas’ leadership.

The entry of Duterte eased out Senator Francis “Chiz” Escudero, who wed celebrity Heart Evangelista in a grand Balesin Island Club ceremony only last February. He tied Roxas at 6th spot with his 4% rating. In the previous November survey, Escudero was in the top 5 with 7%.

Senator Ferdinand “Bongbong” Marcos Jr, who chairs the Senate committee on local government and public works, entered the top 5 presidential preferences list with his 6% rating, higher than his previous 4%. He previously ranked 7th.

Scoring higher than Marcos in the March survey was Senator Miriam Defensor Santiago, whose 9% rating was lower than her previous 12%. Santiago ranked 4th after Estrada and Duterte, followed by Marcos at 5th. 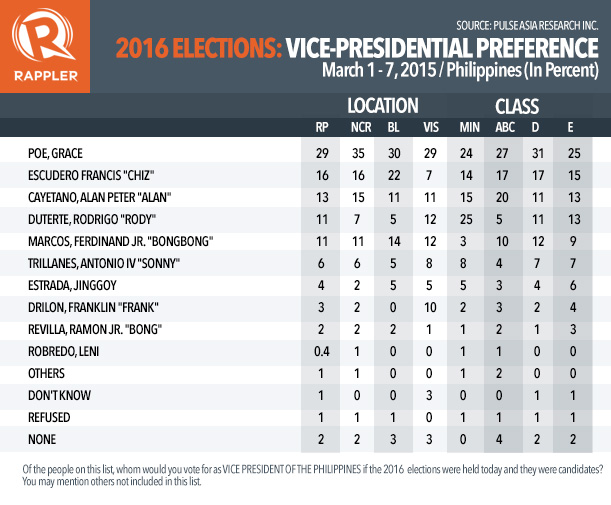 For vice president, the top choice was Poe with 29%, followed by Escudero with 16%, Cayetano with 13%, and Duterte and Marcos, both tied with 11%.