Sotto and Lacson, who each registered a high 97% awareness rating, ranked first and second among the choices of respondents. Sotto got a 59.3% rating compared to Lacson’s 58.3%.

Pangilinan was appointed Presidential Assistant on Food Security and Agricultural Modernization after his senatorial term ended in 2013. 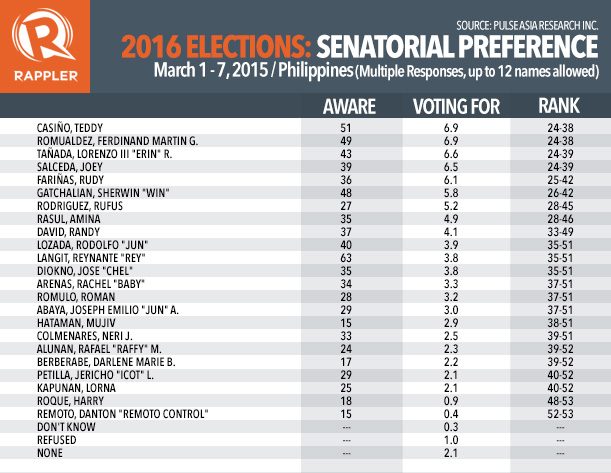 Two other possible senatorial candidates that have a chance of winning are former Akbayan Representative Risa Hontiveros, who garnered 33.1% just like former Senator Jamby Madrigal. Both women occupy slots 8-15, but the survey’s 3-point error margin still gives them a chance in the polls.

Incumbent senators Marcos, Guingona, and Osmeña can seek a second term in 2016. Former senators Gordon and Madrigal, meanwhile, both ran in 2013 and lost.

Thirty-eight other individuals were listed in the senatorial preferences list, including those with an awareness rating of over 90%: Manila Vice Mayor Isko Moreno (91%), Cavite 2nd District Representative Lani Mercado Revilla (94%), and actor Dingdong Dantes (95%). The 3, however, fell outside of the Magic 12. – Chay Hofileña/Rappler.com