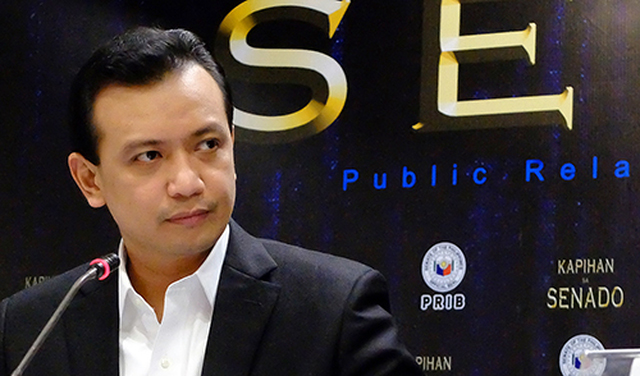 MANILA, Philippines – Is there a “justice for sale” system at the Court of Appeals?

Senator Antonio Trillanes IV made good on his promise to file a Senate resolution detailing his claims that money changed hands for the Court of Appeals’ (CA) issuance of a temporary restraining order (TRO), and injunction in favor of the son of Vice President Jejomar Binay.

Yet Senate Resolution No. 1265 that Trillanes filed on Monday, April 13, merely cited “reliable sources privy to the matter” as it asked that the Senate investigate the corruption allegations. His resolution was peppered with the words “allegedly” and “purportedly.”

Trillanes said that CA justices Jose Reyes Jr and Francisco Acosta of the 6th Division allegedly got a total of P50 million ($1.12 million) from a lawyer the senator claimed was linked to former President Gloria Macapagal-Arroyo.

“Serious allegations have recently surfaced that the Binay camp paid off certain CA justices to rule in their favor. According to reliable sources privy to the matter, a lawyer by the name of Pancho Villaraza facilitated the transaction and talked to Associate Justices Reyes and Acosta, and each of them allegedly received P20 million for the TRO they issued,” Trillanes stated in his resolution.

The senator was referring to the order the court issued to stop the implementation of the preventive suspension of Makati Mayor Jejomar Erwin “Junjun” Binay Jr over the allegedly overpriced Makati City Hall parking building.

The Ombudsman, the Department of Justice (DOJ), and the Department of the Interior and Local Government (DILG) initially said that the TRO was moot because the suspension order was already served, and Vice Mayor Romulo Peña already took his oath as acting mayor.

Trillanes said that at this point, there was another supposed “transaction.”

“A second transaction was allegedly consummated, with Associate Justices Reyes and Acosta allegedly (sic) receiving an additional P5 million each upon the issuance of a writ of permanent injunction. This was purportedly the reason why the concerned CA division issued the writ of preliminary injunction with undue and inordinate haste, long before its TRO is supposed to lapse,” Trillanes added.

There are 3 CA justices belonging to the 6th Division handling Binay’s case. The other is Justice Eduardo Peralta Jr.

The justices have yet to respond to the allegations.

In a text message to Rappler, Villaraza said: “I’m not involved in the case. I don’t even know and have not met Mayor Junjun Binay.”

Trillanes first insinuated last week that the Binays bought the injunction the CA issued upholding its TRO on Binay’s suspension.

Vice President Jejomar Binay dared Trillanes to file a graft and corruption case against him and the CA justices, instead of making allegations on media. In response, Trillanes said he will file a resolution detailing his accusations.

Trillanes cited media reports to describe Villaraza. He said the lawyer “appears to be very powerful and influential.”

“[He is] allegedly a known political operator with deep links among politicians as well as members of the judiciary and the prosecution service, most of whom he once helped to be appointed or promoted either as Prosecutors, Judges, or Justices, particularly during the administrations of former Presidents Fidel V. Ramos and Gloria Macapagal-Arroyo,” Trillanes said.

The senator also said that Villaraza is “known as the personal counsel of [Arroyo] who was allegedly involved in the harassment of journalists because of their reports on the US $20 million or PhP 1 billion extortion attempt on a German airport firm, Fraport AG, in 2003.”

He added: “Atty Villaraza is likewise known as a big-time political contributor, having personally contributed some P30 million to the campaign of [Arroyo] in 2004.”

“[This] was one of the principal reasons which precipitated his much-talked about falling out with his former partners and the eventual dissolution of their decades-old partnership. In fact, according to a letter of his former law partners to the editor of a broadsheet newspaper, said information purportedly originated from Atty Villaraza himself,” he said.

Asked if he’s supporting the Binay campaign, Villaraza said: “I only attack [Interior Secretary Manuel] Roxas. That way everyone benefits –  including the whole country.” Roxas is the perceived rival of Vice President Binay in the 2016 presidential race.

Villaraza is one of the founders of the Carpio Villaraza Cruz (CVC) law firm, which gained prominence during the Ramos regime. A co-founder, Supreme Court Senior Associate Justice Antonio Carpio, used to be the presidential legal adviser of former President Fidel Ramos.

In 2013, the firm went through a bitter split. CVC Law is now Villaraza & Angangco, while the other firm stalwarts such as former Ombudsman Simeon Marcelo and ex-defense chief  Avelino Cruz Jr formed the Cruz Marcelo & Tenefrancia.

Trillanes’ resolution linked his claims with previous allegations of corruption in the judiciary including the controversy over a so-called “Ma’am Arlene.” “Ma’am Arlene” was a supposed big-time fixer dubbed as the “Janet Napoles” of the judiciary, in reference to the alleged mastermind of the pork barrel corruption scandal involving congressional funds.

Both Pimentel and Trillanes are heading the ongoing Senate inquiry into corruption allegations against Binay dating to his leadership of Makati, the country’s financial district.

“Be it hereby resolved by the Philippine Senate to direct the Committee on Justice and Human Rights and/or other appropriate committees of the Senate to investigate, inquire and look into, in aid of legislation, the alleged system of ‘Justice for Sale’ at the Court of Appeals and elsewhere, and other related anomalies in the Judiciary.”

Over the weekend, Makati Second District Representative Abigail Binay, the Vice President’s daughter, said the Binays will file contempt charges against Trillanes over his claims.

Representative Binay said Trillanes should show proof to back up his allegations instead of resorting to “a mere publicity stunt.”

(What he is doing is not a joke. He should show proof and not doctored evidence that is only for media.) – Rappler.com