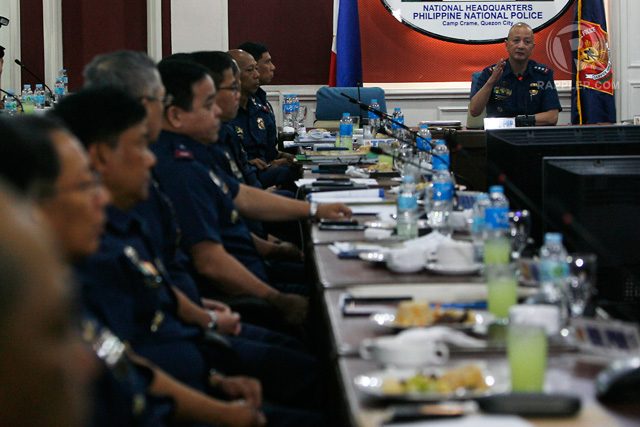 But the President said he did not accept Espina’s resignation right away. “He did submit his resignation and ‘yung (my) acceptance is pending selecting his replacement,” said Aquino in an interview with reporters in Tarlac City.

Several police sources earlier confirmed to Rappler that Espina handed over his resignation to Aquino late March, or 4 months after he was first appointed the PNP’s OIC.

Purisima eventually resigned weeks after “Oplan Exodus,” a January 25 police operation in Mamasapano town that claimed the lives of at least 67 people, including 44 cops.

Despite his suspension, Purisima, a close friend of Aquino’s, sat in briefings and was a key personality even during the controversial operation.

Can Espina still be chief?

Aquino heaped praises on Espina, calling him a “very honorable person” who “loves the service… and the country.”

But is he a candidate for PNP chief?

The President did not give a clear answer when asked by reporters.

“Is he still in the running? Iyon na nga ang point eh (That’s the point). He assumes today, he has to about three months to serve. ‘Pag nag-three months to serve siya, may turnover na naman  (After he serves for 3 months, that would mean another turnover) to the next guy who replaces him, and that’s disruptive to the service. And on that basis General Espina has decided to resign,” said the President.

Espina turns 56, the mandatory age for retirement in the PNP, in July 2015. What the President did not mention during the interview, however, is that he has the prerogative to extend a commissioned officer’s term.

Extending the tour of duty of a PNP chief was done at least twice during the administation of Gloria Macapagal Arroyo. – Rappler.com