New Customs chief: ‘I will double down on reforms’

Apr 24, 2015 6:13 PM PHT
Natashya Gutierrez
Facebook Twitter Copy URL
Copied
Customs Commissioner Alberto Lina vows to continue the reforms started by ex-chief John Sevilla, and vows to 'move faster than usual' with only a little over a year to serve in the position 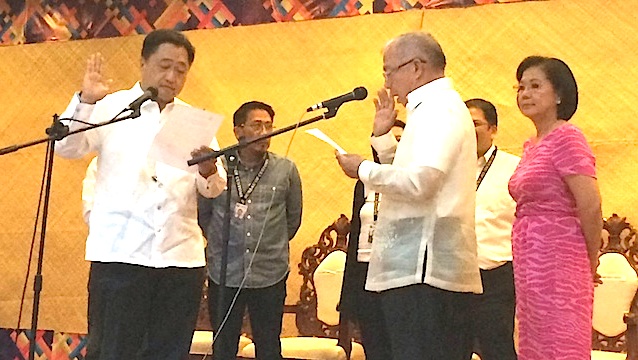 MANILA, Philippines – New Customs Commissioner Alberto Lina on Friday, April 24, vowed to “double down on reforms” and continue “the good governance and process reforms” initiated by his predecessor.

Lina made the commitment in his speech at the Bureau of Customs turnover ceremonies, in the presence of former Customs Commissioner John Sevilla, Finance Secretary Cesar Purisima, and BOC officials and employees.

“Truly, as Secretary Cesar says, I have big shoes to fill, and I intend to carry on the good governance and process reforms he (Sevilla) has started,” said Lina, who took his oath that day, officially becoming the new head of Customs for the second time.

In his speech, Lina stressed the importance of being ready for the ASEAN economic integration, which is set for December 2015, and bared his 5-point plan for the BOC.

On corruption, Lina said data transparency would be key.

“Integrity campaigns are spreading all over the world. It is not only a global buzzword: it will continue to be a centerpiece of our work philosophy here in the Bureau of Customs,” he said.

He also said he would rally stakeholders to collaborate to prevent the recurrence of port congestion, and to ensure ports will adapt to a growing economy. Lina said internal management audits would be introduced as well to help identify problems and provide solutions.

“I agree when Commissioner Sevilla says, ‘Reform is not glamorous. Reform is in the little every day improvements that we can give the public,’” he said. (READ: Customs’ Sevilla: Political nominees last straw)

“Now that I am here, I believe my extensive experience in the private sector will be tested: the primary task assigned to us is not easy, with the end in view of increasing efficiency and improved revenue generation.”

In 2005, Lina, with other “Hyatt 10” Cabinet officials, resigned following allegations of poll fraud against then President Gloria Arroyo.

After his resignation, he returned to the private sector to focus on his businesses under the Lina Group of Companies. (READ: Where are the ‘Hyatt 10’ now?)

In his speech, Lina expressed confidence that his experience in the private sector would help him do a good job in his new post.

“In the years that intervened between my previous stint here to now, I have built a company that is now seen as a leader in logistics nationwide. This has given me much experience and perspective. Further, as a keen observer of Customs, from the outside looking in, I have many ideas I think will make our processes more efficient and systematic,” he said.

Malacañang sought to ease such concerns. “Commissioner Lina is in the process of divesting his interest in his brokerage company to erase any apparent conflict of interest by virtue of his appointment as Customs chief,” said Deputy Presidential Spokesperson Abigail Valte.

Lina has had his own share of controversy. His name was dragged into the 2013 elections when one of his companies, forwarder Airfreight 2100 (Air21), got an alleged anomalous contract with the Commission on Elections (Comelec) for the deployment of election paraphernalia in Mindanao.

The 67-year-old businessman is also a close acquaintance of Purisima and a known supporter of the administration. He was listed as a donor to the campaign of the President’s cousin, Senator Paolo Benigno Aquino IV, in 2013.

Lina’s appointment comes after Sevilla cited a more politically-charged atmosphere in the Bureau as the 2016 presidential elections near, and immense pressure to appoint certain individuals to key positions by outside forces as reasons for his resignation.

A day before he stepped down, Sevilla also stated his refusal to allow the use of the BOC as a milking cow for the upcoming polls – a sentiment that he did not repeat in his speech at the turnover ceremonies.

At the Friday ceremony, Sevilla expressed confidence that his successor would pursue the reforms that he had started. He also joked that he hoped he would get his balikbayan box on time come Christmas.

“I think he is perfectly capable of leading BOC because he came from there. He came from logistics so he understands what needs to be done at BOC. We already talked,  I think he has very clear understanding which is good,” Sevilla said in an interview with reporters.

In his speech, Lina said he understands the job will be tough and have been warned about the perils of the position.

“Yes, many of them have expressed deep concern for my welfare but assure me of their willingness to support me when the going gets rough,” he said of friends and family. His wife, Sylvia, was at the BOC ceremony.

He added: “They caution me in my ways and warn me of the multifarious problems that may come my way. They even ask me to smile more often.”

But Lina, who just turned 67 on the day of his appointment, said he is willing to serve the country and its people as at that stage in his life, it was time for him to “give back.”

“You and I will together draw courage, determination and inspiration and joy with the knowledge that every peso collected will help bring more smiles on the faces of the poor and underprivileged, and enliven the hopes and confidence fellow Filipinos in a brighter future that awaits them,” he said.

Sevilla lasted only a year and 4 months in the position, but Lina will serve an even shorter period, and will only be in the post until mid-2016, serving until the end of Aquino’s term.

“Our time together at the Bureau of Customs may be short. We will have to hit the ground running,” he said. “We will move faster than usual. Speed, integrity, and efficiency will be our trademarks.” – Rappler.com