Sevilla: No pressure from Ochoa, Purisima to resign 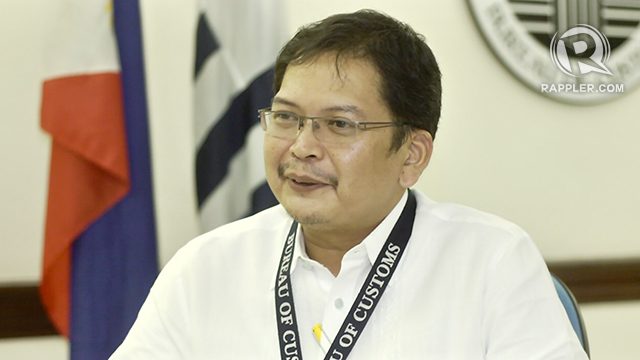 Facebook Twitter Copy URL
Copied
The former Customs chief clarifies the Finance Secretary and the Executive Secretary talked to him about a 'potential reassignment' of an individual within the bureau, but the two respected his decision not to go through with it

MANILA,Philippines – Four days since his resignation, former Customs Commissioner John “Sunny” Sevilla said Finance Secretary Cesar Purisima and Executive Secretary Paquito Ochoa were some of the government officials who talked to him about the “potential reassignment” of an individual within Customs – but clarified neither of the two asked him to resign.

On Monday, April 27, Sevilla released a statement to clarify “erroneous and misleading reports.” In the statement, he emphasized 6 points, including the involvement of the two Cabinet secretaries of President Benigno Aquino III.

“At various points starting in late 2013 and through 2014, I had discussions about Atty. Teddy Raval and his potential reassignment or appointment to various positions in Customs, with Executive Secretary Paquito Ochoa, Deputy Executive Secretary Teofilo Pilando, Jr., Secretary Cesar Purisima, and DOF (Department of Finance) Undersecretary Carlo Carag,” he said.

“I was initially told that the Iglesia ni Cristo (INC) was pushing for his reassignment to the Intelligence Division.”

Sevilla had initially refused to name the government who he said sent him texts and called him about Raval’s possible appointment.

On the day of his resignation, April 23, Sevilla told Rappler that Intellectual Property Rights Division acting chief Raval has been pushed “very hard” for the post of Director of Enforcement and Security Service (ESS), more commonly known as head of the Customs police. Sevilla also said he resigned because he “felt wrong” about political nominees being pushed for certain positions in the Bureau of Customs (BOC). He said he had received word that Raval would be appointed ESS head despite his opposition.

Sevilla clarified in his statement that “the officials mentioned above fully respected” his decision not to reassign Raval to the Intelligence Division. He also reiterated that he has “no direct confirmation that the Iglesia ni Cristo” was truly pushing for Raval’s appointment.

The INC, which boasts a membership of 2.25 million, requires members to vote only the politicians whom their leaders endorse. This is where it gets its political influence – in its powerful bloc voting.

During elections, it has been a tradition for candidates, from the local to the national levels, to make a pilgrimage to INC leaders to secure their support. The INC has also been known to lobby for government posts for members of its church.

Sevilla’s other points of clarification were that he was not fired; he was never asked directly to raise funds for the coming 2016 polls; no one lobbied him to appoint Raval; and that his resignation was his decision alone.

Asked last Thursday whether anyone had asked him to resign, Sevilla only told Rappler, “I’d rather not answer that.” A day before, Sevilla also said he would not let Customs be used as a milking cow for the elections.

In his statement, Sevilla also expressed “hope” that “all Customs stakeholders will work together with Commissioner Alberto Lina toward our common goal of a Bureau of Customs that is efficient, effective and free of corruption and politics.”

“Toward this end, Commissioner Lina and Secretary Purisima will have my support and any help they may need from me.”

On Friday, Lina, who also served as BOC chief during the presidency of Gloria Macapagal-Arroyo, became Sevilla’s replacement as appointed by Aquino.

Lina, who vowed to continue Sevilla’s reforms, is a close acquaintance of Purisima and is a supporter of the ruling Liberal Party.

Several business groups, lawmakers and netizens have expressed their disappointment over Sevilla’s resignation, lamenting he was a reform-focused man who was pushed out of his position through politicking.

In his speech at the turnover of leadership in the Bureau last Friday, Purisima made a reference to the accusations, saying, “In a democracy, politics is a reality of life. I believe the two go hand in hand.” – Rappler.com