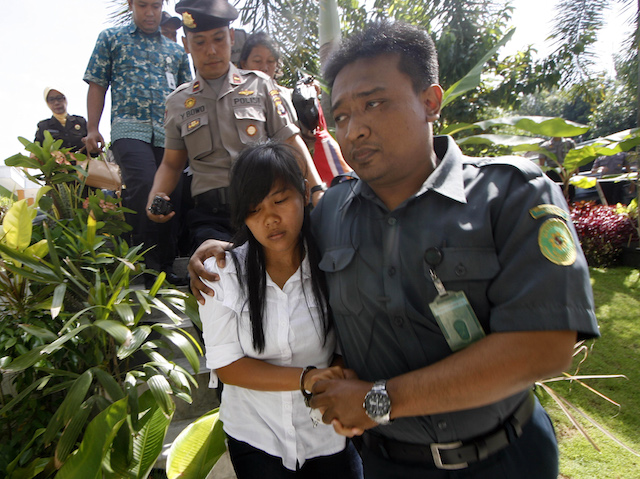 MANILA, Philippines – Government investigators recommended the filing of charges against an African man and two Filipino nationals for trafficking Mary Jane Veloso, a Filipina set to be executed in Indonesia.

The African man, known by the name “Ike,” allegedly helped Veloso’s recruiter in duping her.

In a letter to Prosecutor General Claro Arellano at the Philippine Department of Justice, the National Bureau of Investigation (NBI) recommended the following for prosecution:

Mendez said the 3 committed the crimes in April 2010 in Nueva Ecija in the Philippines, Malaysia, and Indonesia.

He also pointed out that Sergio and Lacanilao “have no license or authority to recruit persons for overseas employment,” according to the Philippine Overseas Employment Administration.

The charges come as an Indonesian court rejected Veloso’s second petition for a case review. In the second appeal, the Philippines argued that Veloso was a victim of human trafficking. (READ: Pacquiao begs Indonesian leader: Save Mary Jane)

The NBI’s letter to the DOJ supports this claim.

The letter contains Veloso’s narration of how Sergio, Lacanilao, and Ike allegedly tricked her into smuggling 2.6 kilograms of heroin into Indonesia. (READ: The story of Mary Jane Veloso, in her own words)

Veloso said Lacanilao introduced her to Sergio in April 2010.

Sergio promised to help her look for a job in Malaysia, accompanied her there, and then introduced her to Ike.

In Malaysia, Sergio reportedly told Veloso “that they will go to Indonesia to meet someone.” Eventually, however, Sergio said she couldn’t join Veloso in Indonesia.

Based on Veloso’s account, Sergio also promised to buy Veloso a bag because she had none. On April 24, 2010, Ike handed Veloso a traveling bag, which “though empty appears to be heavy.”

The NBI said Veloso did not know “that there were illegal drugs in the luggage she was carrying, and that she was a victim of deception and manipulation by her illegal recruiters.”

“Facts surrounding the circumstances of her recruitment, transportation, and stay at a foreign country also shows that she is a victim of human trafficking owing to the fact that her vulnerability (in dire need of a job in order to support her family) was exploited by her recruiters through manipulation and deception, in order for her to unwittingly transport a contraband (illegal drugs) without her knowledge,” the NBI said.

Under Philippine laws, human trafficking involves, among other things, recruiting persons through deception “for the purpose of exploitation.” – Rappler.com