Facebook Twitter Copy URL
Copied
(UPDATED) Citing threats to her life, Maria Kristina Sergio is placed under protective custody of the PNP, but criminal charges against her stand

MANILA, Philippines (UPDATED) – The woman accused of recruiting and duping another Filipina, who was eventually convicted for smuggling drugs in Indonesia, will be placed under the “protective custody” of the Philippine National Police (PNP). (READ: Mary Jane Veloso’s recruiter brought to Camp Crame)

“We are taking in, we are agreeing to the request of Maria Kristina Sergio for protective custody. Bibigyan siya ng protection ng PNP (The PNP will provide her protection),” Roxas said.

In the press conference, De Lima explained that Sergio was given the option to receive protection from either the PNP or the justice department. Sergio chose to remain under the protective custody of police.

Roxas has since tasked Espina to form a team that will provide Sergio’s protection. 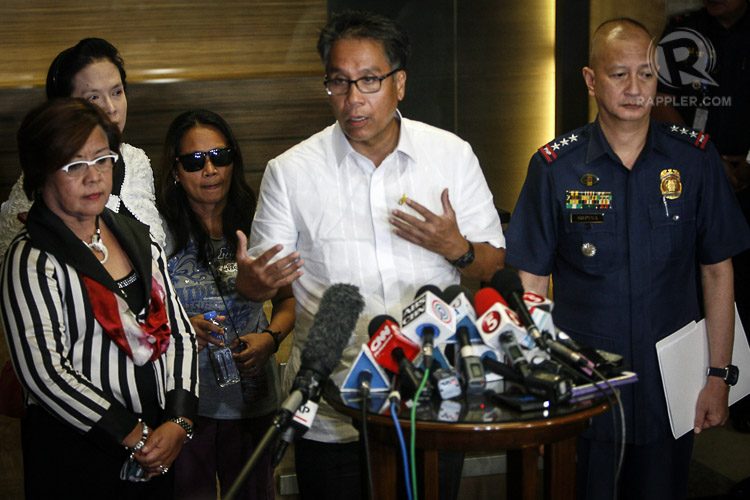 (What’s important here is that Mary Jane is saying she’s only a victim and that her recruiters forced or fooled her into transporting the drugs in her luggage.)

While she is under police custody, Sergio’s movements will be largely limited and dictated by the PNP, Espina said.

Both Roxas and De Lima, however, clarified that granting Sergio’s request for protective custody does not mean she is absolved of the charges filed against her and two others.

On Monday, the justice department recommended that Sergio, her partner Julius Lacanilao, and a certain “Ike” be charged for illegal recruitment, estafa, and human trafficking in connection with Veloso’s case.

Sergio allegedly started receiving threats shortly after. While the charges have been filed, no arrest warrant has been issued against her.

When asked if the threats had come from drug syndicates, Roxas refused to speculate but conceded that “anything is possible.”

Sergio earlier surrendered her cellphone for forensic investigation so police can track where the threats came from.

While Sergio is under the PNP’s protective custody, the National Bureau of Investigation and Justice Department will continue with its probe, based on the testimony of Veloso.

The different government agencies agreed that the “right of access [be] given to the investigations of the NBI with proper coordination with the PNP,” De Lima said.

Sergio is seen as key to changing Veloso’s fate in Indonesia.

Veloso was scheduled to be executed via firing squad past midnight April 29, but this was postponed, following Philippine President Benigno Aquino III’s last-minute pleas to Indonesia.

The 30-year-old mother of two was sentenced to death after she was found guilty of drug smuggling. But Veloso insists she was only duped into bringing in 2.6 kilograms of heroin into Indonesia.

Sergio’s surrender was cited by Indonesia as one of the reasons behind her last-minute reprieve. “Because the legal process is still ongoing in the Philippines, we must ensure Mary Jane Veloso deserves justice,” Indonesian President Joko Widodo said.

Roxas refused to divulge where Sergio will be accommodated while under police custody. Sergio did not submit an affidavit to police or government officials, Roxas later told reporters.

The meeting at Camp Crame was limited to Sergio’s request for protection. – Rappler.com