May 1, 2015 10:00 AM PHT
Voltaire Tupaz
Facebook Twitter Copy URL
Copied
(UPDATED) The Velosos are grateful for the overwhelming public support they received during their ordeal in Indonesia when Mary Jane was scheduled to be executed by firing squad 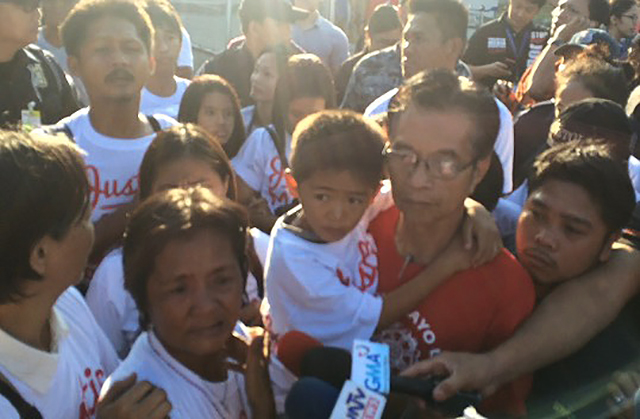 MANILA, Philippines (UPDATED) –The family of Mary Jane Veloso is back in the Philippines, looking tired but defiant.

The family emerged at the airport wearing T-shirts printed with these calls: “Justice for Mary Jane! Justice for all migrant workers.”

The Veloso family said officers from the Department of Foreign Affairs (DFA) were waiting for them at the airport when they arrived.

“When we landed, it was announced in the plane that we should wait for DFA personnel at the tunnel,” Celia said in Filipino.

“They told us they will bring us back to Cabanatuan but we declined,” Cesar added in Filipino.

In the press conference after their arrival, the Velosos revelead they felt uneasy with DFA and Philippine embassy representatives when they were together in Indonesia during the ordeal.

“Gusto naming magpa-media…Gusto rin naming magpasalamat sa Presidente ng Indonesia, wala, eh, lagi kaming nasa sasakyan,” Celia added. (We wanted to speak to the media. We wanted to thank the Indonesian President, but we couldn’t. We were always in the car.)

But the Philippine embassy explained to Rappler’s Indonesia Bureau it was just following instructions from prosecutors.

Meanwhile, the DFA on Friday evening, May 1, disputed the claims of the Veloso family, noting it continues to assist Mary Jane and her family. (READ: DFA hits Velosos’ claims: We helped Mary Jane)

Grateful to the nation

Celia said her family is grateful for the overwhelming public support they received during their ordeal in Indonesia when Mary Jane was scheduled to be executed by firing squad.

But Mary Jane’s sister Darling, had strong words for the Aquino government.

“Sumuko na sila. Taumbayan ang nakatulong (They gave up. It was the people who helped us),” Darling said.

While the Indonesian government acknowledged Aquino’s plea, it also recognized the efforts of human rights organizations who campaigned to save the life of Veloso. (READ: Jokowi on Mary Jane Veloso: I listened to rights groups)

Responding to the Velosos’ claims, Aquino on Friday, May 1, said: “We did what we could‎. We were not involved in the creation of the problem. You must remember she was arrested, if I am not mistaken, April of 2010.”

Aquino enumerated the help his government extended to the Veloso family – from the lawyers to the intercessions done with Indonesian President Joko “Jokowi” Widodo and foreign ministers, to the communications with Indonesia’s attorney general.

Aquino also stressed the government brought the entire family to Indonesia to be with Mary Jane.

From the airport, the Veloso family proceeded to Migrante International headquarters in Quezon City where they were greeted with a thunderous applause, warm embraces, and a hearty meal.

The Velosos reside in Nueva Ecija but since March, they have stayed with Migrante International campaigning to save Mary Jane from Indonesia’s death row.

In an emotional moment before breakfast, the Velosos hugged members of Migrante, whom they already consider as part of their family, Celia said.

“Migrante was the only group that extended help when we were desperate to save Mary Jane. When they found us and offered help, we immediately accepted their help,” Celia earlier said in Filipino. (WATCH: The fate of Mary Jane).

They joined the Labor Day rally at Mendiola in Manila, reiterating their disappointment with the government’s weak and belated response to Mary Jane’s case prior to the reprieve.

Veloso was arrested in 2010 with 2.6 kilograms of heroin sewn into the lining of her suitcase. She claimed she went to Indonesia for a job as a maid and was duped into carrying drugs by an international drug syndicate. On April 29, President Jokowi Widodo spared Mary Jane from execution. – Rappler.com