POEA to recruiters: Use ‘electronic systems’ in hiring OFWs 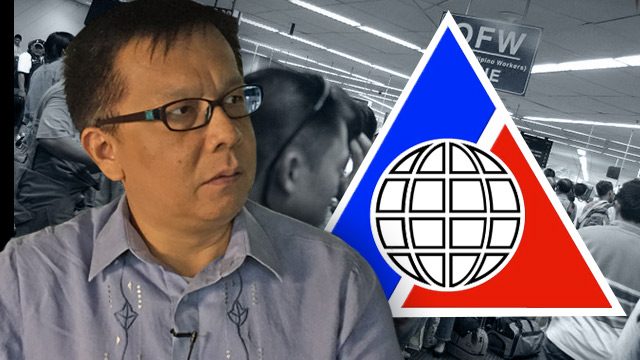 “Because electronic systems are the way to go. It’s win-win for all sides. It’s more expedient, streamlined, but of course, also, more transparent and makes people more accountable,” Cacdac explained.

Recruiters, he said, should “step up to the plate and have their systems.”

Cacdac said improving the recruitment process of OFWs would entail going digital, as this would allow the worker access to various documents almost at the time of release.

An electronic system or e-system could potentially prevent falsification of documents or getting defrauded by the recruiter. Crucial information in a workers’ employment contract – such as his or her employer, salary, and job description – could also be accessed almost in real-time.

Streamlining the process for employment-related migration is a priority for the POEA, said Cacdac.

POEA acknowledged that time is a crucial element for a would-be migrant worker badly in need of a foreign job placement. Speedier illegal recruiters have become a viable option in his or her eyes when under time pressure. (READ: ‘Slow’ gov’t process makes OFWs fall for illegal recruiters)

While an OFW will be able to secure employment abroad some two months faster through the illegal process than the proper channels, the dangers that await are overwhelming and at most times irreparable.

Cacdac has explained that illegally-recruited OFWs end up stranded in foreign land, forced to work against their will in low-paying jobs, at times in establishments in remote areas that are used as front for prostitution rings.

One such case is that of Mary Jane Veloso, a Filipino whose execution over drug smuggling charges was delayed in Indonesia. In her narrative, she says she was unwittingly used as a drug mule by her recruiter.

According to the 2013 Commission for Filipinos Overseas Compendium of Statistics, there are around 1.34 million undocumented Filipino migrant workers – a number the government wishes to shrink.

The Philippines’ processes in managing migration are meant to protect the interest and rights of OFWs, whose remittances provide a major boost to the economy.

However, the administration of President Benigno Aquino III envisions “a government that creates jobs at home so that working abroad will be a choice rather than a necessity.”

A known labor-sending country, the Philippines manages the licensing of recruitment agencies and the release of approved work contracts for OFWs through the POEA.

A worker applies for a job abroad in a recruitment agency, which screens would-be migrant workers for valid job orders issued by the host or destination country.

All the necessary documents of a worker are submitted to POEA, which will release a worker’s approved job contract.

The POEA monitors the screening process mainly through the documents submitted and through constant checks on the agencies, with erring agencies stripped off of their licenses.

While not directly involved in the screening of the worker, the government provides pre-employment orientation seminars for aspiring OFWs to determine for themselves if they are fit for work abroad.

While there may be costs to upgrading or shifting to an electronic system, the long-term gains for both recruiters and OFWs outweigh these costs.

Labor Secretary Rosalinda Baldoz has instructed a closer look into the capitalization of recruitment agencies, he said, especially “about recruiters who were P3 million 3 years ago and are still P3 million today.”

“I mean, where did the profits go?” he asked. “So one has to re-infuse and get ahead of the game, and this is precisely what we have been encouraging recruiters to do.”

“Some recruitment agencies are already prepared. However, many are not,” he said. – Rappler.com