May 22, 2015 6:54 PM PHT
Rappler.com
Facebook Twitter Copy URL
Copied
Hosted by Thailand on May 29, the meeting will include officials from 15 countries including Indonesia, Malaysia, Bangladesh, and Myanmar 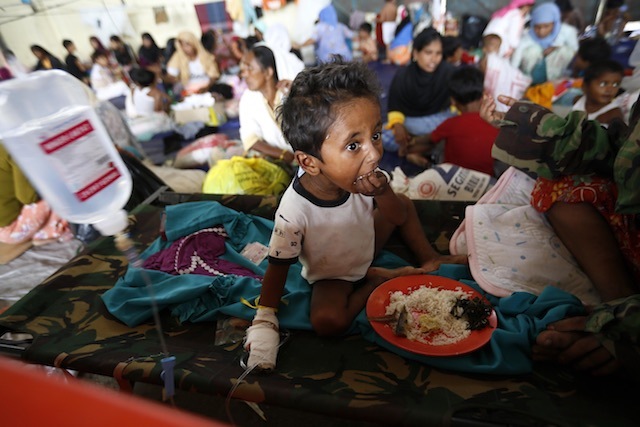 MANILA, Philippines – The Philippines will join a regional meeting next Friday, May 29, to discuss the plight of up to 7,000 “boat people” from Myanmar’s ethnic Rohingya, one of the world’s most persecuted minorities.

Philippine Justice Secretary Leila de Lima said the Department of Foreign Affairs will lead the Philippine contingent in the meeting.

The Filipino delegates will participate as observers, De Lima said.

Thailand will host the regional summit on May 29. The one-day meeting in Bangkok will include officials from 15 countries including Indonesia, Malaysia, Bangladesh, Myanmar, Australia. and the United States.

The Thai foreign ministry described the special meeting as “an urgent call for the region to…work together to address the unprecedented increase of irregular migration.”

De Lima explained that the meeting aims for an action plan on the Rohingya’s plight. (READ: FAST FACTS: Who are the Rohingya?)

For now, she said the United Nations High Commissioner for Refugees (UNHCR) has requested the Philippines to send ships to rescue thousands of boat people in Indonesian and Malaysian seas.

“That’s something that we can also endorse, but it’s not going to be my decision,” De Lima said.

UNHCR representative Bernard Kerblat, who met with De Lima on the issue, described the Rohingya problem as a “very complex, multi-faceted crisis of huge importance.” This is because the Rohingya “are subject to trafficking” and many of them “experienced persecution in the past.”

“It’s not one country that will solve it, but it’s a result of this general consultation. And we’re very, very happy to take note that the Philippines is ready to positively engage in this process of consultation towards a search for a solution,” Kerblat said.

The Philippines, however, indicated possible constraints in its aid for Asia’s refugees.

The Philippines on Thursday, May 21, said rehabilitation efforts for Super Typhoon Yolanda (Haiyan) survivors will likely limit its aid for Rohingya “boat people” from Myanmar and Bangladesh.

“We are mindful that we are constrained by resource limitations, especially considering that we are still in the midst of implementing a massive rehabilitation and reconstruction program for areas affected by Typhoon Yolanda,” Communications Secretary  Herminio Coloma Jr said in a statement. – Paterno Esmaquel II, with reports from Agence France-Presse/Rappler.com