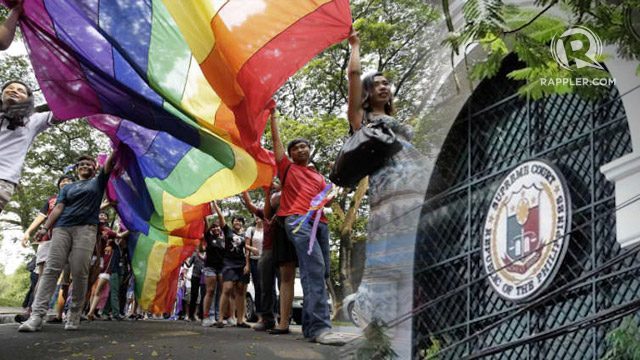 The lawyer, who identified himself as openly gay in his May 18 petition, argued that limiting civil marriages and the rights that go with such unions to heterosexuals violate the constitutionally guaranteed protection for equal treatment, undue interference to liberty rights, and marital autonomy.

Petitioner Jesus Nicardo Falcis III said the limitations imposed by the 1987 Family Code favoring only opposite-sex marriages repealed the 1949 Civil Code, which never made such a distinction.

CLICK TO READ THE ASSAILED PROVISIONS OF THE FAMILY CODE

His petition was submitted to the High Court a few days before a historic referendum in Ireland approving gay marriage.

“I was happy with the development. It gives me hope that a Catholic country can accept gays as equals in the eyes of the law,” he said of the Ireland vote.

“The message it gives me is that people can be rational in delineating between religious views and secular or legal views. That your religion shouldn’t be imposed on others,” he added.

Same-sex marriage is “of transcendental importance to the nation because of the millions of LGBT (Lesbian, Gay, Bisexual, Transgender) Filipinos all over the country who are deprived from marrying the one they want or the one they love,” read the petition.

“Those who pursue same-sex relationships despite the stigma are deprived of the bundle of rights that flow from a legal recognition of a couple’s relationship – visitation and custody rights, property and successional rights, and other privileges accorded to opposite-sex relations,” it said.

First of its kind

Obtained by Rappler, the 31-page plea highlighted the need for a more LGBT-inclusive society and is the first known and reported legal action of its kind before the Philippine SC.

Bills seeking to allow same-sex marriage have surfaced in the past but no law has been enacted to date.

The SC may or may not act upon the petition, a legal dilemma sure to draw varied social commentaries in the predominantly Catholic country of 100 million.

Falcis explained to Rappler that “no actual case unfolds such as a gay couple going to the local civil registrar and applying for a marriage license” because of prevailing social attitudes against same-sex relationships. (READ: Remarks vs Laude reflect deep-seated prejudice – CHR)

“No one has dared assert their right in a society where they would probably be ashamed and discriminated [against] for doing so,” he said.

Catholic prelates in the Philippines have condemned gay marriages, even claiming that priests who solemnize such marriages are liable under the law. 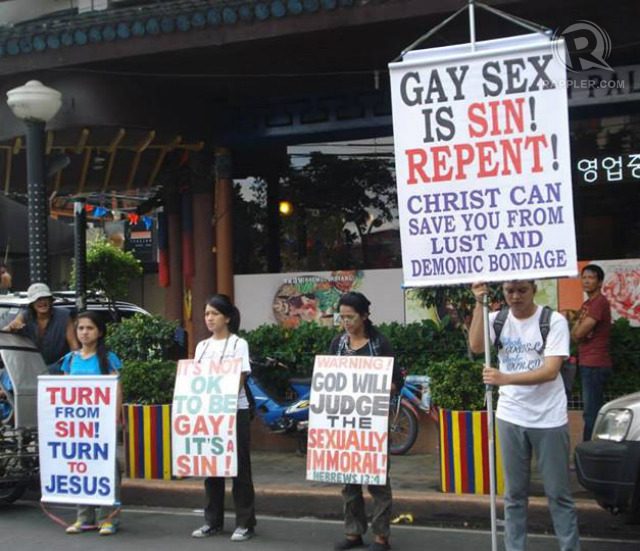 In his petition, Falcis argued that he “has a personal stake in the outcome of this case” being “an open and self-identified homosexual.”

He said he “has grown up in a society where same-sex relationships are frowned upon because of the law’s normative impact.”

His “ability to find and enter into long-term, monogamous same-sex relationships is impaired because of the absence of a legal incentive for gay individuals to seek such relationship,” he added.

Sharing his thoughts on gay marriage, President Benigno Aquino III had earlier questioned if such a union is “something that is desirable in an environment for a child.”

No compelling state interest exists to limit civil marriages to opposite-sex couples, he said, adding that “homosexuals just like heterosexuals can fulfil the essential marital obligations laid down by the Family Code.”

“Both straight and gay couples have the same chances of breaking up or falling out of love,” he said.

“Sexual orientation by itself is not debilitating to a person’s ability to function,” he argued.

The University of the Philippines alumnus stressed that procreation is not a legal requirement in the formation of a family. The lawyer challenged that notion of “sexuality as a choice or preference.”

This supports the legal argument that the exclusion of LGBTs from civil marital unions is an unfair classification, he said.

In the Philippines and elsewhere in the world, most closet gays fear conservative backlash ranging from social rejection to violence.

The number is projected to be higher given unreported incidences. A recent politically charged case involves a transgender woman who was choked from behind and drowned in the toilet of a cheap hotel.

In response to increasing violence targeted against LGBTs, the Philippine Commission on Human Rights made a move to protect the interests of the LGBTQ community by documenting hate crimes – violence done on the basis of the victim’s sexual orientation and gender identity (SOGI) – against LGBTs across the country.

The creation of safe spaces – establishments where LGBTs can freely express their sexual orientation and gender identity – and the conduct of gender sensitivity training in law enforcement agencies are among the things that advocates continue to fight for. – with a report from Reynaldo Santos Jr/Rappler.com