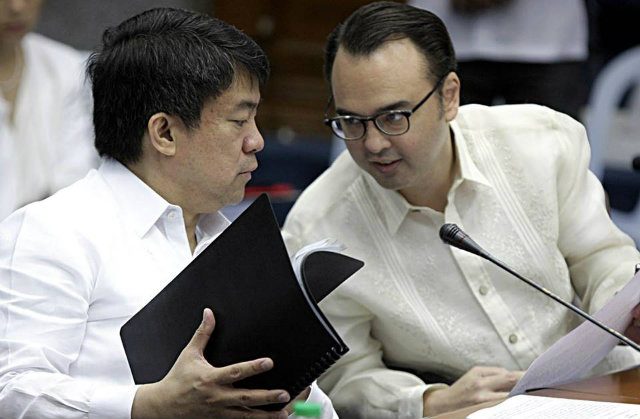 MANILA, Philippines (UPDATED) – After 10 months and 21 hearings, the Senate blue ribbon subcommittee finally came out with a partial report recommending plunder charges against Vice President Jejomar Binay and his son.

The report found “a system of corruption” in the infrastructure project worth P2.276 billion ($51.7 million).

Pimentel is among 4 senators who have signed the report as of Thursday, May 28. The others are rumored presidential bet and Binay challenger Senator Grace Poe, and senators Alan Peter Cayetano, and Antonio Trillanes IV.

“I just submitted my partial subcommittee report because it’s ripe to submit one,” Pimentel told reporters. “It was time to make the report on the Makati parking building because we have heard it sufficiently. Others will follow.”

Pimentel said 4 senators have signed the report but did not name the two others. He also said only Senate blue ribbon committee chairman Teofisto Guingona III can discuss the contents of the report.

Yet a copy of the report seen by Rappler showed that father and son Binay should face plunder charges for signing documents as the agency heads for preliminary services for the parking building. The building was first constructed in 2007, when the elder Binay was mayor, and was finished in 2013 after his son took over in 2010.

The same building is the subject of a plunder complaint lawyer Renato Bondal filed against the Binays in July 2014. The Ombudsman suspended the younger Binay as it investigates the case, but the Binays questioned the suspension before the Supreme Court.

The subcommittee also recommended the filing of plunder cases against members of Makati City Hall’s Bids and Awards Committee, resident auditors of the Commission on Audit, and the contractor, Hilmarc’s Construction Corporation.

Pimentel said a majority or 9 signatures of the 17-member committee is needed for the draft report to be endorsed as the official report of the panel. The report is now being circulated for signatures. It is almost 50 pages long.

The members of the Senate blue ribbon committee are:

Of the 17 members, only Pimentel, Cayetano and Trillanes actively participate in the hearings.

Cayetano said that the hearings clearly established that there was a conspiracy to plunder public funds.

(No one will receive kickbacks if no one gave money. A private citizen, for example, can say, ‘I am not part of that, they just asked me as a contractor.’ But you gave money. How can you not earn when you raised the price of the contract?)

Cayetano said that the Senate investigation showed that the bidding was rigged, Hilmarc’s was favored, kickbacks were received, and that the project was “chop-chopped” into 5 phases. (READ: Red flags in ‘overpriced’ Makati infra projects)

“There were many admissions. For example, the architect said that just how many days or weeks before the bidding, they already discussed this, and there was no soil test. All this will tell you whether there was an anomaly or not,” Cayetano said.

The report will pressure other senators to reveal their stand on the corruption allegations against the Vice President after skipping one of the most politically sensitive Senate inquiries all this time.

Pimentel could not say if his report will gain enough support but Cayetano was optimistic.

Cayetano said: “Given the encouragement we were given for the months we were hearing, many on the floor said, ‘You’re doing a good job. Keep it up,’ given the facts here in the carpark building, and given the people whispering to the chairman that they will support, I expect to make the number.”

“Let them read it, maybe they agree with the conclusion, I’m confident the report is thorough.”

Even before it was released, the Binay camp already ridiculed the report, and branded it anti-climactic.

Binay spokesperson JV Bautista questioned the purpose of the report considering that the Binays already face a plunder complaint over the same building.

“Wow, that’s earthshaking. What a revelation! The issuance of a partial report is only an indication that they don’t intend to stop this witch hunt, which is a pathetic exercise in utter futility,” Bautista said in a press briefing at the Senate before the start of the 21st hearing on Thursday.

Cayetano responded that there is still no court case. He added that even if a case is already pending in court, the Senate has the power to conduct inquiries in aid of legislation.

The Binay camp also asked how much the Senate is spending just to “destroy the name of Vice President Binay.”

Pimentel shot back: “Ang tanong ko, magkano na ba ang natitipid nila sa kaka-presscon inside the Senate? Ang amin, trabaho eh (My question is: how much have they saved by holding press conferences in the Senate? What we are doing is work.) – Rappler.com