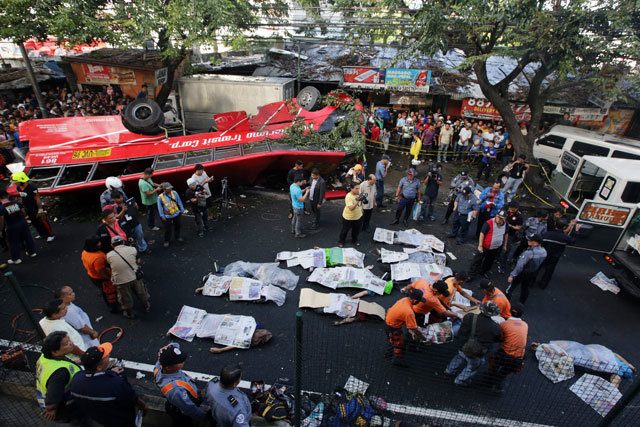 MANILA, Philippines – Citing concerns over an increasing number of road accidents in the Philippines, Senator Ralph Recto renewed calls for a more effective use of road user’s tax collections to keep motorists safe and prevent losing more lives due to road accidents.

On Sunday, June 28, the senator said the Motor Vehicle User’s Charge (MVUC) allocation in the national budget should be itemized, adding that the funds pooled from car registration payments must include details on how the money will be spent.

Recto stressed that road safety must be prioritized, citing statistics from the Philippine National Highway Patrol Group which showed an “alarming 20% jump” in the number of vehicular accidents: from 12,875 in 2013 to 15,572 in 2014.

Data from the Metropolitan Manila Development Authority (MMDA) also showed that there were 90,258 accidents last year in the National Capital Region (NCR) alone.

The MMDA said 16,665 of the accidents resulted in non-fatal injuries, while 73,175 caused damage to property and 418 people were killed.

Recto said the funds from the MVUC “must now be optimized in the campaign to keep roads and motorists safe.”

With nearly 8 million vehicles on the road, MVUC collection is forecast to reach P13.7 billion this year.

The funds may be used not only for traffic signals, markings, and lanes, but also for road safety education and training programs, Recto said.

The MVUC can be used to buy ambulances which can be stationed in traffic-prone highways, patrol cars to go after overspending vehicles, and tow trucks to attend to stalled vehicles, the senator said.

It can also be used to light dark tunnels and underpasses and provide for the deployment of reliable emergency accident response teams.

(In EDSA, not even one well-equipped rapid emergency medical team is stationed there, considering that the thousands of motorists who regularly pass that road pays millions for the MVUC.)

“All collections from road user’s tax must be spent for road safety. That’s the end objective,” he added. – Katerina Francisco/Rappler.com