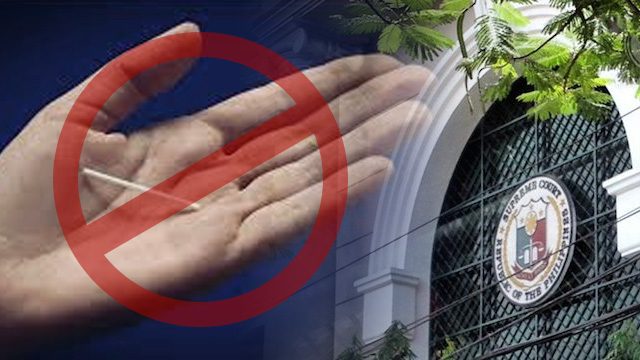 MANILA, Philippines – More than a year after it held the reproductive health (RH) law constitutional, the Supreme Court (SC) has temporarily stopped the health department from distributing and selling implants.

This contraceptive implant can prevent pregnancies up to 3 years. (READ: A year after the RH law, why the silence?)

In the two-page resolution dated June 17 and penned by Senior Associate Justice Antonio Carpio, the High Court also prohibited the Food and Drug Administration (FDA) from “granting any and all pending application for reproductive products and supplies, including contraceptive drugs and devices.”

The 2nd division of the SC was acting on a complaint filed by the Alliance for the Family Foundation Philippines which alleged that the FDA:

Likhaan director and co-founder Dr Junice Melgar told Rappler in a phone interview on Tuesday, June 30, that the TRO was “totally unexpected,” especially since implants are a popular choice among the women they serve in the poorest districts of Manila.

“The petitioners just want to stop everything and go back. They’re questioning the law again – there’s no sense…. Even as of this time, a lot of people who heard the news are very worried. They’re asking: are contraceptives now illegal? Are we no longer allowed to use implants?” she said in a mix of English and Filipino.

The court’s decision comes on the heels of a report from the United Nations Committee on the Elimination of Discrimination Against Women which found the Philippines accountable for tolerating ordinances by the city of Manila that “gravely” and “systematically” violated women’s rights.

On Monday, June 29, a city official admitted to women’s groups that at least one of the two ordinances – Executive Order 003 – led to “some violation” of women’s rights to access RH services and commodities. The ordinance discouraged the use of artificial methods of contraception.

SC asked DOH to comment on the resolution within 10 days from notice. – Rappler.com