LIBERTAD, Antique – A photo of a very large fish caught in the Philippines went viral on social media, causing many to wonder whether the picture was faked.

It turns out, the fish – a giant grouper or locally known as Lapu-lapu – was real.

The fifth class Municipality of Libertad in the Province of Antique drew public attention last July 8, 2015 when pictures of a very big fish circulated in social media and the internet.

The fish which was stranded in the shallow waters of the town was identified as a giant grouper (Epinephelus lanceolatus), locally known as lapu-lapu in Filipino, or pugaro or kugtong in the Kinaray-a dialect. Known as the largest reef-dwelling fish in the world, the stranded fish measured 7 feet and weighed 176 kilograms.

Fisherman Jessie Cacam of Barangay Taboc in this Municipality spotted the dying fish in Balo Point and solicited the aid of seven other fishermen in carrying it from the Pandan Bay to shore.

This type of fish is characterized by a large mouth and rounded tail. Juveniles have irregular black and yellow markings, while adults are green-grey to grey-brown with faint mottling, with numerous small black spots on the fins.

It’s the first time that a grouper this size was seen in the town and according to one of the elders in the village, so far “that pugaro is the biggest grouper caught in the town of Libertad.”

Fishermen in the town usually catch tuna and mackerel in the municipal waters.

The giant grouper is considered a vulnerable species by the International Union for Conservation of Nature (IUCN) Red List Status, indicating the need to protect and conserve its species.

“A person weighing 50 kilos can fit inside the mouth of the grouper,” said Barangay Captain Estaquio Daypuyart.

The ailing lapu-lapu eventually died and was sliced and its meat sold to a businessman in Kalibo, Aklan.

A kilo of lapu-lapu currently costs around P80.00 in the market. Based on estimates, the grouper could fetch a total of around P14,080. 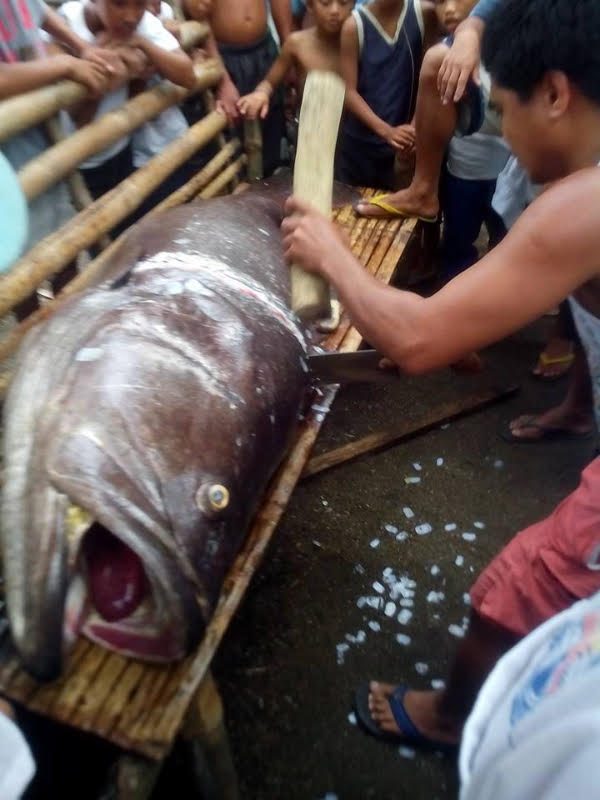 Being the second biggest archipelagic state, the Philippines enjoys the presence of vast fishing grounds surrounding its 7,107 islands from the northernmost tip of the Batanes group of islands down to the islands of Tawi-Tawi in the south.

According to the 2012 statistics of the Food and Agriculture Organization of the United Nations, the country ranked among the major fish producing countries in the world with a total production of 3.1 trillion tons of fish, crustaceans, mollusks, and other aquatic animals.

Geographically, the Province of Antique is an elongated stretch of land resembling a seahorse in shape which occupies the entire western side of the island of Panay. It is 155 kilometers long and 35 kilometers in its widest point.

Out of its 18 municipalities, only 3 are inland while 14 of these are coastal and one is island town.

Fishing is the major source of livelihood for families in the 15 municipalities.

The presence of coral reefs in the Taboc and Tinigbas Sanctuary in Libertad serve as home to fishes and other marine animals.

Last December 2014 until February of 2015, several green sea turtles laid their eggs in the coastal barangay of Sabang West in Bugasong, Antique.

The presence of these turtles was also a first for the barangay after about 50 years according to Brgy. Captain Raul Jauod.

Jauod believes that the presence of the sea turtles might be due to the more or less 100 artificial jackstone-type reefs that they have installed in area of the usyami courtesy of the Bureau of Fisheries and Aquatic Resources (BFAR) last May 15, 2014. They have also installed an additional 200 units.

The artificial reefs serve as the spawning or breeding, nursery and shelter ground for various marine life. It would also improve and increase fish production.

“The grouper found in our town indicates that bigger fish can still thrive well in our municipal waters,” said Mayor Norberto P. Raymundo, Jr. of Libertad. Raymundo is currently the Chair of the Libertad, Pandan, Sebaste and Culasi (LIPASECU) Bay-wide Management Council.

“However, we are closely monitoring all fishing activities in order to strictly enforce necessary laws,” he added. – Rappler.com