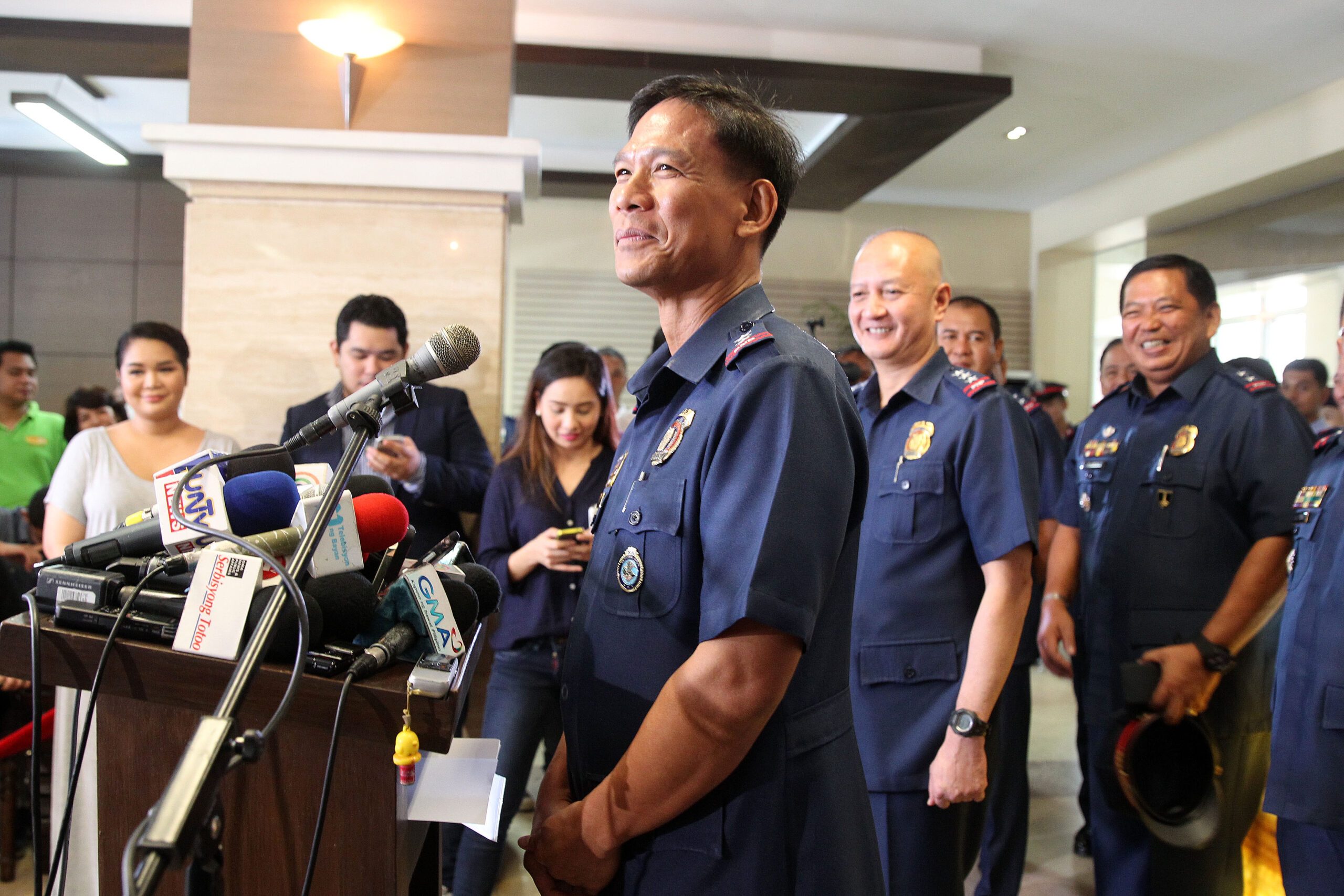 Facebook Twitter Copy URL
Copied
(UPDATED) Director Ricardo Marquez, a graduate of the PMA Class of 1982, is appointed the new chief of the PNP, besting 2 senior officials who were also considered for the post

MANILA, Philippines (UPDATED) – After 7 months of being led by an interim leader, the Philippine National Police (PNP) now has a full-time chief.

Director Ricardo Marquez, currently the chief of the Directorate for Operations, will be the 150,000-strong PNP’s new chief, Interior Secretary Manuel Roxas II told a press conference in Camp Crame on Tuesday, July 14.

Marquez will officially be installed as the new chief of the police force on Thursday, July 16, the same day the PNP officer-in-charge Deputy Director General Leonardo Espina is given his retirement honors.

“We are at a point in time in the history of the organization where we are recovering and moving on from a difficult situation,” said Marquez on Tuesday.

He added: “[It’s] an opportune time to focus more on the core functions of the police… patrolling the streets and our communities to prevent crime, and making sure that crimes are properly investigated if we fail to prevent them from happening and to track down and take down the most wanted criminals and criminal gangs.”

The two-star police general, a member of the Philippine Military Academy (PMA) Class of 1982, was picked by President Benigno Aquino III after months of vetting candidates for the plum PNP post.

Marquez, who hails from Maragondon, Cavite, was interviewed by the President on June 17.

The race for the post has been among the most heated and anticipated in recent history.

Early on, Marquez was among the contenders for the post, alongside other senior officials. (READ: The PNP chief and the problems he will face)

It was only in the past few weeks that Marquez emerged as the leading contender. Marquez was the DO’s deputy chief, and played a key role in preparing the PNP for the 2013 midterm elections.

As DO chief, Marquez headed preparations for Pope Francis’ visit to the Philippines in January 2015. He also currently heads the PNP’s plans for the ongoing APEC Summit meetings.

The PNP’s plans for the coming 2016 elections are currently being ironed out and as DO chief, Marquez is one of the many officials leading preparations.

His experience in planning major events – a midterm election included – will come in handy, since the 2016 presidential elections was a huge factor in the President’s selection process.

Aquino wanted a PNP chief who will outlast his own term and still be in service during and after the elections.

Marquez is retiring in August 2016 yet, when he turns the mandatory retirement age of 56. Garbo will be retiring in March 2016, or just as the official campaign period for national posts begins. Constantino will retire in July 2016.

Roxas, speaking to reporters on Tuesday, was all praises for Marquez.

Marquez is a product of the public school system.

He graduated salutatorian at the Tulay Elementary School and was the valedictorian of his batch from the Bucal Barangay High School. He ranked #16 in his PMA class.

For his graduate studies, Marquez earned a Masters Degree in Management at the Philippine Christian Academy.

The announcement of Marquez as PNP chief comes more than 7 months since the former chief, Director General Alan Purisima was preventively suspended by the Ombudsman over his alleged involvement in a dubious deal between the Firearms and Explosives Office (FEO) and courier service Werfast.

Purisima eventually stepped down as PNP chief in February 2015 in the aftermath of “Oplan Exodus,” a botched police operation which claimed the lives of more than 60 people, including 44 of the PNP’s own men.

In late June, Purisima and several other police officials – including Chief Superintendent Raul Petrasanta, previously considered a shoo-in for PNP chief – were dismissed by the Ombudsman over the Werfast deal.

Aquino had previously asked for the public’s patience as he picked a new PNP chief because he was not prepared to do so until November 2015, or Purisima’s scheduled retirement. The President, said he needed time to sort through the mudslinging in the PNP before picking his next chief.

Sources from within and outside the PNP have suggested that Marquez is Purisima’s choice, allegedly so the latter can be shielded from the pending graft cases against him.

Police sources also pointed out to Rappler that although Marquez is not part of Purisima’s inner circle, the two generals have something in common: they are both Masons.

Marquez has a daunting task ahead.

Aside from the ongoing APEC Summit meetings and the 2016 elections, the police general will head a PNP still reeling from the effects of “Oplan Exodus” and sorting out factions within its commissioned ranks.

Preventing another Mamasapano and the divisions in the PNP were among the issues Aquino had asked Marquez and Constantino to write about during their June 17 meeting. – Rappler.com