In IRR, names of designated terrorists will be published on ‘reasonable suspicion’ 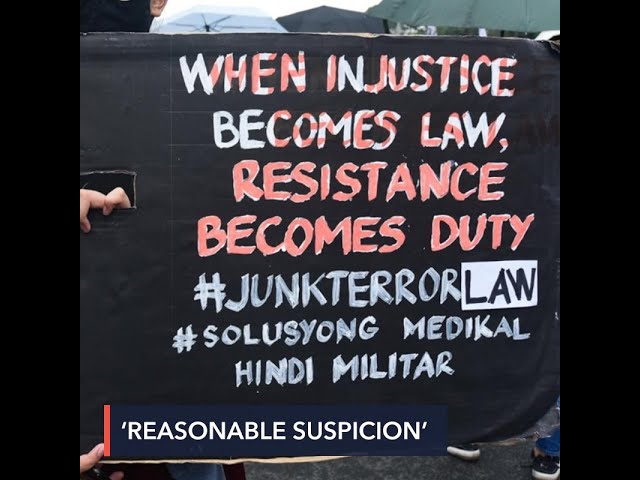 The implementing rules and regulations (IRR) of the anti-terror law allows the non-judicial Anti-Terror Council (ATC) to designate persons as “terrorists” and publish their names on newspapers and government websites based on “reasonable ground of suspicion.”

Designation is a distinct ATC power under Section 25 of Republic Act No. 11479 or the anti-terror law, separate from the court power of proscription. Through this, the anti-terror law empowers the Anti-Money Laundering Council (AMLC) to freeze the assets of such individuals and groups.

The words “reasonable ground of suspicion” are not found in the law. The text of the law only says “upon finding of probable cause” by the ATC.

“Probable cause under the Constitution has a well-accepted definition. The standard inserted by the IRR dilutes the standard of probable cause, as defined by the cases,” said criminal law expert Ted Te, former Supreme Court spokesperson.

Inserting the words “reasonable ground for suspicion” in the IRR “is a new creature that Charles Darwin did not anticipate was going to be born,” said Edre Olalia, president of the National Union of Peoples’ Lawyers (NUPL).

“It digresses from the customary and established definition and understanding of probable cause,” said Olalia.

Justice Undersecretary Adrian Sugay said that the definition of probable cause is sourced from the Supreme Court itself.

Sugay cited the 2015 case Comerciante vs People on warrantless searches where the Court said that “probable cause was defined as a reasonable ground of suspicion supported by circumstances sufficiently strong in themselves to warrant a cautious man to believe that the person accused is guilty of the offense with which he is charged.”

But the Supreme Court case pertained to warrantless searches.

Sugay said that the same definition of probable cause as being a reasonable ground of suspicion is found under Rule 3.a.9 of the IRR of the Terrorism Financing Prevention and Suppression Act.

The IRR also introduced a new feature to designation – the names of the designated people are going to be published in a newspaper of general circulation, and on the internet, on the websites of the Official Gazette and the ATC.

This is found under Rule 6.5 that says the names will be published as well as “a brief description of the case for designation and the date of designation or date of last review of designation.”

“The IRR cannot add that as a requirement because it changes substantially what the law provides. It also poses grave constitutional questions particularly on presumption of innocence, burden of proof, and the like,” said Te.

The general explanation on IRRs frequently used by lawyers is that “the water cannot rise above the source,” meaning the IRR cannot substantially change what the law says.

By adding the feature of publication, Olalia said the water did not just rise from the source, “it even flowed all over the place; it inundated the whole law.”

Te said the IRR’s feature of publication “directly legitimizes a form of profiling or terrorist tagging which can again result in immediate consequences.”

A petition filed against the law by an indigenous peoples’ group pointed out that the Department of Justice’s misfiling of a proscription case against 600 people is proof that the government is out to red-tag.

In the drug war, the government also names generals and politicians in so-called “narcolists” without a judicial determination, and in many instances, without disclosing the vetting process the list underwent.

In a recent case involving Leyte 3rd District Representative Vicente Veloso, the Court of Appeals (CA) ordered the government to show proof of its basis for including Veloso in the list, saying that the lawmaker is entitled to his right to informational privacy.

Veloso was able to win that relief after a second try at the CA and on a petition for the writ of habeas data. Habeas data privileges, if granted, would order the government to destroy the damaging information.

“Habeas data has not been shown to be an effective relief based on Supreme Court decisions, particularly when it comes to actions of the Executive Branch,” said Te.

Te cited the case of detained opposition senator Leila de Lima – the Court junked the senator’s petition for writ of habeas data against President Rodrigo Duterte based on presidential immunity.

The IRR also added a new feature of delisting, where designated people can petition the ATC to delist them based on several grounds like mistaken identity or new evidence.

Sugay said the ATC should keep its deliberations properly documented and then make those records available for the person who wants to be delisted. But this remedy was not spelled out in the IRR.

“Dapat ganoon (It should be the case), not unless it’s a matter of national security. To the extent that it’s relevant,” said Sugay.

Still, Te said, it again shifted the burden of proof from prosecution to the suspect.

“Even if there is a process of delisting, placing the burden on the listed entity is unreasonable because the burdens of proof in criminal cases are always on the prosecution, never on the accused or respondent,” Te said. While the person is still not delisted, the petition filed by retired Supreme Court senior associate justice Antonio Carpio said law enforcement can use the designation as grounds for endless arrests.

Even though Section 25 of the law only talks about freezing of assets as a consequence for designation, Section 29 and the IRR allows warrantless arrests of suspected terrorists and their detention for up to 24 days.

“On the 25th day, the ATC may order the rearrest of the designated individual or member of an organization that remains designated/proscribed as a terrorist since the designation or proscription order is still valid,” said the Carpio petition.

Sugay acknowledged that “it could lead to that,” but the DOJ official said that if prosecutors rule the warrantless arrest as invalid, or doesn’t file a charge in court, law enforcers should not use the designation as basis to arrest again.

But prosecutors could rule the warrantless arrest as invalid, order a person released, but still move the case for further investigation. Is the designation still valid as ground for arrest again, in that case?

“That’s subject to interpretation. That has to be interpreted in light of Section 29 (warrantless arrest). But for me, designation is really more for the purpose of going after an asset,” said Sugay. – Rappler.com