Facebook Twitter Copy URL
Copied
On February 22, 1986, Manila Archbishop Jaime Cardinal Sin makes an urgent appeal to Filipinos to go to the vicinity of Camp Aguinaldo where the two senior officials were holed up after withdrawing support for dictator Ferdinand Marcos

On February 22, 1986, Sin delivered a message on Radio Veritas, appealing to the public to protect then-defense minister Juan Ponce Enrile and then-Armed Forces of the Philippines Vice Chief of Staff Fidel Ramos who were holed up in Camp Aguinaldo. 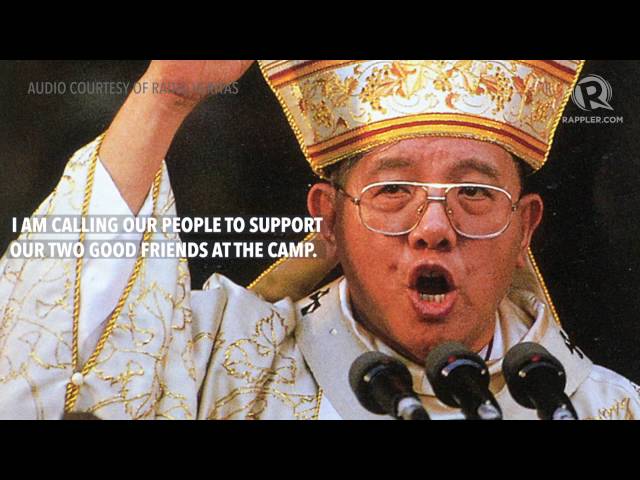 “My dear people, I wish you to pray because it’s only through prayer that we may solve this problem. This is Cardinal Sin speaking to the people, especially in Metro Manila,” Sin said in his message aired by Radio Veritas on February 22, 1986.

“I am indeed concerned about the situation of Minister Enrile and General Ramos. I am calling our people to support our two good friends at the camp. If any of you could be around at Camp Aguinaldo to show your solidarity and your support in this very crucial period, when our two good friends have shown their idealism, I would be very happy if you could support them now,” the Cardinal added.

Sin said that his “only wish” was that “violence and bloodshed be avoided,” and called on the faithful to “pray to our Blessed Lady to help us in order that we can solve this problem peacefully.”

Three days after the Cardinal’s appeal, Marcos was toppled through a bloodless revolt.

On February 27, 1986, two days after Marcos and his family fled the country, Sin thought of establishing a shrine that would commemorate the peaceful revolution. The EDSA Shrine was later built to serve as a reminder of the EDSA Revolution and also of the Blessed Mother’s intercession. – Rappler.com