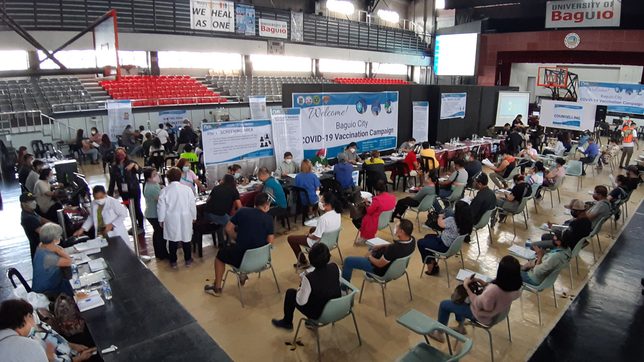 VACCINATIONS. Baguio senior citizens and healthcare frontliners have themselves inoculated against COVID19 at the University of Baguio gymnasium.

From a daily average of nearly 106 cases daily in April, Baguio has seen the number of cases go down notably in the month of May.

According to the daily log of the City Health Service Office from May 1 to May 24, the average went down to around 63 cases daily. The only time the counter hit triple digits was on May 1, when the number of cases was at 107.

City Health Officer Dr. Rowena Galpo said that, although the city’s epidemic risk level remained at moderate as of May 10, the city fared a little better in two indicators – the average daily attack rate (ADAR) or the proportion of the population that contracts the disease in a specified time, and the two-week growth rate (TWGR) which captures how quickly the number of cases changes every two weeks.

The Department of Health added Baguio was removed from the list of the top ten locations with the most number of cases in the country, being moved to 16th place.

Deaths from COVID-19, however, were another matter.

The hospital care utilization rate also improved at 72.43%, placing it at a high-risk level from an earlier critical level, while isolation utilization was at low-risk level with 56.89% occupancy.

Part of the better COVID-19 outlook is the aggressive vaccination drive of the city.

As to the brand used on senior citizens, AstraZeneca registered a total of 3,534 shots for first-dose use. There still is no recorded second dose for senior citizens for the Astrazeneca vaccine.

In total, the number of senior citizens vaccinated the first dose of Sinovac and Astrazeneca vaccines is at 5,202.

The latest statistics come from the Department of Health and the City Health Services Office (CHSO), including Physician Khecy Manuel-Colas, Risk Management Officer Cecil Agpawa ,as supervised by Rowena Galpo, head of the CHSO.

Coordination meetings are done after every vaccination session, with representatives from each site.

As for AstraZeneca use among A3 priority individuals, 10,071 were vaccinated with their first dose out of 11,950 expected people. Some 436 received their second dose from a target population of 3,830.

Figures for the vaccinated population of the first three groups are being validated by personnel from the CHSO and the DOH.

Aiming for 60% inoculation by year’s end

The city, meanwhile, aims to inoculate 60% of its target population by the end of the year.

Magalong said rough projections showed the Summer Capital can achieve its target of immunizing 60% or more of its target population of 190,000 before the end of 2021, though this will depend on the supply of vaccines and other factors.

The mayor, however, is optimistic the city can complete its vaccine requirement by August through its own procurement program, alongside pledges from private groups and its allocation from the national government.

The city’s four vaccination sites have six teams per site; thus, each team would need to conduct 120 vaccination per day four times a week to achieve the target.

“If based solely on this calculation, then we can say it is doable, but as the mayor said, there are factors to consider. We will do our best to achieve our target,” Galpo said. – Rappler.com