Speaker Alan Peter Cayetano moves to end plenary debates on the 2021 budget on October 6, 2020. Screenshot from the House of Representatives Facebook page

Speaker Alan Peter Cayetano again outmaneuvered his rival Representative Lord Allan Velasco on Tuesday, October 6, as he railroaded the 2nd reading approval of the Philippines’ proposed 2021 budget while his allies moved to suspend session until November 16.

It was a one-two punch that countered Velasco’s accusations that Cayetano was holding the 2021 budget hostage while also preempting his rival’s plans to sit as speaker by October 14.

Lawmakers approved House Bill No. 7727 or the proposed 2021 General Appropriations Bill (GAB) on 2nd reading after Cayetano himself made the motion to terminate both the period of debates and period of amendments for the measure.

When these periods are terminated, the 2nd reading approval of the bill immediately follows.

As soon as the 2021 budget was approved on 2nd reading, Deputy Majority Leader Xavier Jesus “XJ” Romualdo moved to suspend the session until November 16.

The motion was accepted by presiding Deputy Speaker Raneo Abu, who immediately suspended the proceedings. Abu is party mates with Cayetano in the Nacionalista Party.

Several lawmakers like Buhay Representative Lito Atienza tried to object to both motions while viewing the proceedings via Zoom. But their voices were either drowned out by Abu or they were completely muted in the teleconferencing app against their will.

When session resumes in November, the House can then vote on the 2021 budget on final reading. But this also means the Cayetano-led House would miss its self-imposed deadline to pass the budget by October 14.

Cayetano and his allies can only move to suspend the session for now, since the official 18th Congress calendar sets the adjournment period – a time when no session can be conducted unless the President calls for one – from October 17 to November 15.

Still, it’s enough to make it harder for Velasco to fulfill his dream of becoming Speaker by October 14. 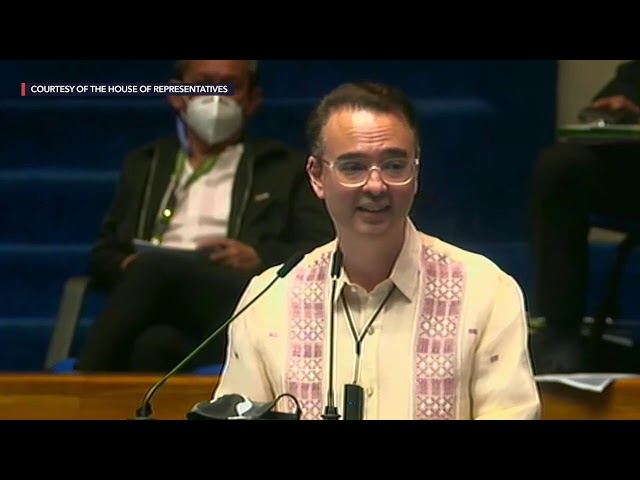 Cayetano: ‘I am not hostaging the budget’

In his speech, Cayetano said passing the 2021 budget on 2nd reading on Tuesday was the best way to debunk Velasco’s allegations against him.

“Applying Section 55 of our rules, I move to terminate the period of debate of House Bill 7727 otherwise known as the GAB. I so move, Mr Speaker,” he added.

Section 55 of the House rules state that a motion to close the debates on a bill will be allowed if 3 speeches in favor and two against, or after one speech in favor or none against, have been conducted.

The marathon plenary debates for the 2021 budget were already on its 6th day when Cayetano made his surprise motion in the chamber.

A congressman can be heard objecting, but his voice was overpowered by Deputy Speaker Abu. He immediately put the 2021 budget up for its 2nd reading vote, with the ayes overpowering the nays.

Cayetano’s latest play in the House comes just 4 days after Velasco claimed the Speaker is allegedly holding the 2021 budget hostage in a bid to cling to power.

In a deal brokered by President Rodrigo Duterte himself, Cayetano and Velasco are supposed to share terms as Speaker. Cayetano is to lead the House for the first 15 months of the 18th Congress, then Velasco takes over in the 21 months after that.

But it’s not clear when exactly Velasco should assume as Speaker. Duterte himself has not given a decisive answer on the matter either, giving Cayetano an advantage in his rivalry with Velasco. House members’ grumblings over the inequitable distribution of the 2021 budget triggered the latest power struggle in the chamber and compounded legislators’ uncertainty over the implementation of the term-sharing deal.

The 2021 budget is an election year budget. Political analysts believe keeping the speakership is crucial for Cayetano if he has any plans of running for president in 2022. (READ: In House power play, Speaker Cayetano’s Palace dreams are at stake)

The President told his warring his allies that the 2021 budget must be approved on time – meaning before the end of December – to prevent the government from operating on another reenacted budget next year.

The Duterte administration had to operate on a reenacted budget for the first 3 months of 2020 after Duterte failed to sign the GAB on time. Congress passed the budget on December 11, 2019, but the President signed it only January 6, 2020.

Cayetano’s motion in effect skips the crucial period when the public can watch for themselves how lawmakers debate on the budget and propose realignments to benefit their respective districts.

The Speaker, however, assured his colleagues that their districts’ needs would still be met.

How? By creating a small committee composed of majority and minority lawmakers tasked to thresh out all the budget amendments to be proposed by their colleagues.

The panel is to be chaired by House Majority Leader Martin Romualdez.

Cayetano said each district and party-list lawmaker will be given either a personal district report or personal sector report, which they can use to specifically outline the budgetary needs of their constituents.

“We will work on your budgets during the break to make sure that before we send it to the Senate, each and every district… Mga kababayan na nanonood, hindi po congressman ang nililigawan namin dito. Ang mga papel po na ito, buhay ito,” Cayetano said.

(We will work on your budgets during the break to make sure that before we send it to the Senate, each and every district… To the people watching, we’re not wooing congressmen here. This paper, it’s about lives.)

(It’s not pork barrel. This is about the needs of the people. There are no lump sums here.)

Cayetano, who was formerly foreign secretary, also said he has already spoken to Cabinet members to make sure they would make themselves available for any lawmaker’s questions.

There is precedent for Cayetano’s maneuvers in the chamber.

The House had even missed its own deadline to pass the budget in October 2018.

To help resolve the budget row, Arroyo created a small committee that finalized the individual amendments to the 2019 budget. Doing so allowed the Arroyo bloc to negotiate with disgruntled legislators behind closed doors. – Rappler.com