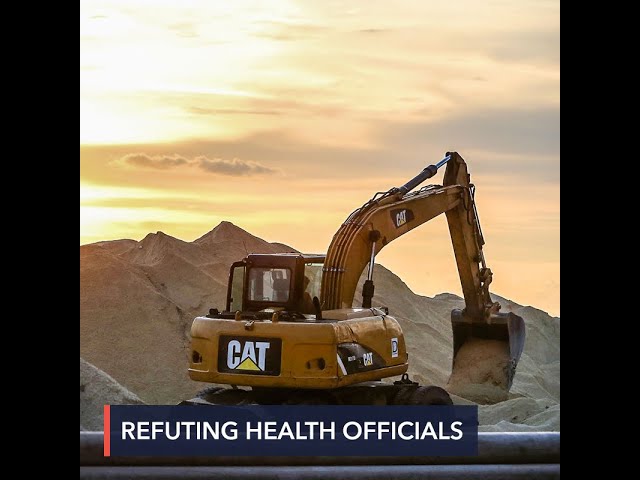 During the House deliberations of the Department of Environment and Natural Resources’ (DENR) budget on Tuesday, September 8, Cimatu said that the dolomite used is 3 times bigger than regular sand and won’t go up in the air. (READ: FAST FACTS: What is dolomite sand, and how will it affect Manila Bay?)

“There is indeed a harmful effect. If you crush dolomite in a mining area without protective wear for your nose, it will be harmful because of the small dust particles and silica, which is a component of dolomite. But this is not a concern here because the dolomite used is bigger and it is only during mining,” Cimatu said in a mix of English and Filipino.

The Department of Health said on Monday, September 7, that dolomite could pose health risks.

Aside from respiratory problems, Vergeire said that dolomite sand could cause eye irritation and discomfort in the gastrointestinal system.

“Dolomite will clean the water from acidic to alkaline,” Cimatu said. He also noted that dolomite is used in aquariums.

Moreover, Cimatu added that dolomite is already used in several resorts in Cebu.

He also said that there will be pipes installed to prevent sand from being washed away from the artificial beach area.

Environment Undersecretary Jonas Leones backed up the project as well, emphasizing that the use of artificial sediment and “beach nourishment” have been done in other countries.

While the DENR has aired their side on why it opted to create an artificial beach in Manila Bay amid the coronavirus pandemic, it is important to note that they never provided its detailed plans to the public.

Media has repeatedly asked DENR for its plans since it launched the program in January 2019.

Instead, the DENR gave only a short email, which stated that the efforts will be done in 3 phases. The email was only 2 pages long.

Environmentalists, fisherfolk, and church groups pushed Tuesday, September 8, for a petition to stop the dumping of crushed dolomite along the Manila Baywalk.

“It must be stopped as it has not undergone an environmental impact assessment nor a consultative and participatory process in both Manila Bay and Cebu,” the petition read. – Rappler.com