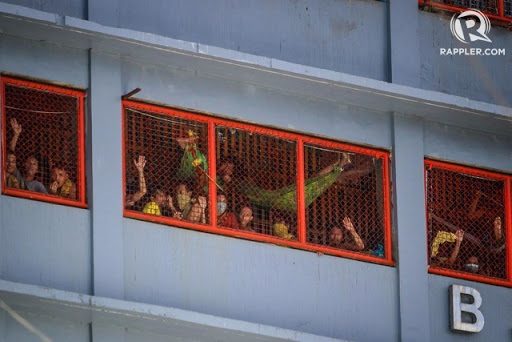 OVERCROWDED. A file photo of the Cebu City Jail, one of the most congested jails in the country at a 1000% congestion rate.

Facebook Twitter Copy URL
Copied
With a staggering 403% jail congestion rate, COA flags BJMP for 'inadequate planning' that delayed 29 projects that could have improved the situation

It took the COVID-19 virus and the government’s ramped up drug plea bargain program to make headway in decongesting the infamously crowded Philippine jails, but the congestion rate is still way off the charts at 403% in 2020.

Worse, the Commission on Audit (COA) said that the “inadequate planning” of the Bureau of Jail Management and Penology (BJMP) delayed 29 construction projects, “defeating the objective” to decongest the jails further.

That’s equivalent to 115,336 prisoners occupying facilities meant only for 34,893 people.

“While congestion rate decreases by 35% in 2020, 403% congestion rate is still way beyond the accepted standards set by the United Nations,” the COA said in its 2020 report for BJMP.

The congestion data excluded the New Bilibid Prison and other correctional facilities under the Bureau of Corrections (BuCor). The BJMP data covered prisoners who were still on trial.

“These conditions greatly affect the morale and disposition of (persons deprived of liberty) PDLs considering that they are not yet convicted and are presumed innocent,” said auditors.

There’s no updated data yet on how many prisoners died of COVID-19 in BJMP facilities, but Rappler’s investigation in 2020 showed a high number of deaths at BuCor facilities.

Auditors said the decrease in the total population in BJMP jails was due to “suspension of commitment due to the current pandemic, speedy disposition of drug cases in relation with the adoption of Plea-Bargaining Framework in Drug Cases, application of R.A. No. 10592 (Good Conduct Time Allowance), and continuous paralegal interventions.”

The Supreme Court implemented several policies in 2020, following a COVID-19 outbreak in these congested jails.

The policies include letting newly-arrested people stay at police stations, and ordering judges to urgently comply with the seven-year-old rule to release prisoners who have been detained longer than their minimum penalty, and those whose cases are not moving because of lack of witnesses.

The plea bargain deal framework for drug cases, on the other hand, drove up the government’s conviction rate, at 82% or an equivalent of more than 24,000 prisoners. These meant drug suspects getting released because of plea deals.

Human rights lawyers have raised concern that plea deals were “skewing the statistics” and forcing innocent people to take the deal as it was the easiest way out of the crowded jails.

Jollibee ramps up expansion in China

In Metro Manila, the epicenter of the virus, jails released 8,436 prisoners. In 2020, the total jail population in the capital region is 27,138. That is still a staggering 595% congestion rate because the capacity is only 5,125.

BJMP was allotted P4.6 billion in 2018 and 2019 for decongestion projects which were supposed to be completed by 2020, but 29 projects worth P2.3 billion were delayed, which the bureau blamed on the pandemic.

However, auditors observed that it was not just the pandemic, as extensions were granted even before the global health crisis had set in.

“Inadequate planning of these projects resulted in non-utilization of jail facilities as intended and defeated the objective of the Bureau in providing functional and responsive jail facility that promotes PDL,” said auditors.

“If only BJMP’s Regional Engineers and Technical Working Group meticulously planned the project details and evaluated the capacity of contractors, delays in the implementation, completion and utilization of these projects may have been minimized if not prevented,” auditors added.