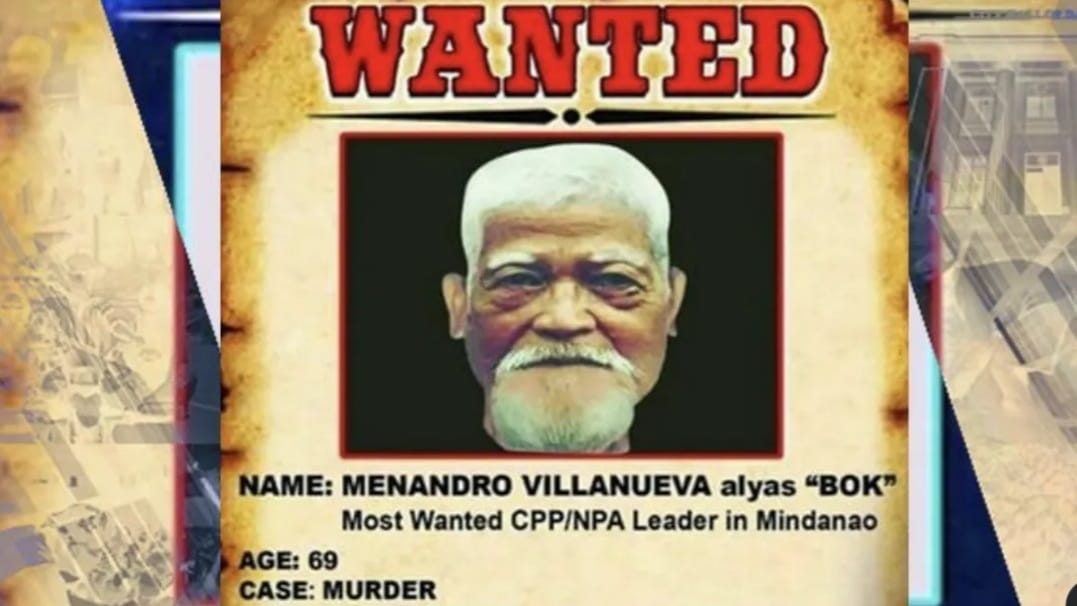 DEAD. A facial composite of NPA leader Menandro Villanueva released by the military before he was killed in an encounter in Davao de Oro

BUKIDNON, Philippines – The Communist Party of the Philippines (CPP) on Wednesday, January 12, confirmed the killing of one of the founders of the New People’s Army (NPA) in an encounter in Mabini town, Davao de Oro last week.

Marco Valbuena, CPP chief information officer, told Rappler that the body of Menandro Villanueva, also known as Bok, Jude, and Gipo, was now with his family.

Villanueva, 70, was active in the communist insurgency for more than five decades. He was among those who established the NPA.

Valbuena said it took time before the CPP could confirm the January 5 killing of the 70-year-old Villanueva because of the ongoing military operations in Davao de Oro.

Brigadier General Jesus Durante III, the commander of the Army’s 1001st Brigade, said Villanueva was the national operations commander and long-time secretary of the National Democratic Front’s Southern Mindanao Regional Committee (SMRC) and served in its Mindanao commission, and the politburo of the CPP’s central committee.

Valbuena described Villanueva as a “humble, silent ardent revolutionary who chose to be in the background yet his presence was felt in his deep, sharp political and military sense.”

Lieutenant General Greg Almerol, the commander of the Armed Forces of the Philippines Eastern Command (Eastmincom) based in Panacan, Davao City, on Wednesday said Villanueva’s death was another big blow to the longest communist insurgency in Southeast Asia, and it would take time for the CPP-NPA to find his replacement.

“As a result of this, we expect more communist terrorists to either yield to the troops or continue to suffer defeats under an inexperienced leader in the coming days,” said Almerol.

Almerol said it was Villanueva who trained the best commanders the NPA ever had.

“His death is a loss to the Party and the NPA. Hundreds upon hundreds of cadres and NPA commanders were trained by him…in the Davao region and across the country. Not a few are ready to take up the cudgels,” said Valbuena.

Villanueva started as a student activist from the Ateneo de Manila University (ADMU) under the Kabataang Makabayan (KM) before he went underground in the ’70s when Martial Law was declared by the then-strongman Ferdinand E. Marcos.

Durante said Villanueva lived the life of a fugitive who was wanted for multiple murders, double frustrated murder, arson, robbery with intimidation, and rebellion, among others.

Before Villanueva’s violent death in an encounter, Durante said, soldiers also killed Anna Sandra Reyes, the secretary of the NDF’s Regional White Area Committee (RWAC) under the SMRC, during an encounter in the region on Christmas eve.

Major General Ernesto Torres Jr., commander of the Army’s 10th Infantry Division, said the deaths of the two leaders were a “colossal blow” to the NPA and “signal the end of the communist insurgency.”

Torres said soldiers have launched a manhunt for two other NPA leaders – Eric “Jun” Casilao and his wife May who managed to escape during the encounter with Villanueva’s group. On Eric’s head is a P5.4-million bounty.

The Casilaos, the military said, are likely to be the next top leaders of the NPA. – Rappler.com