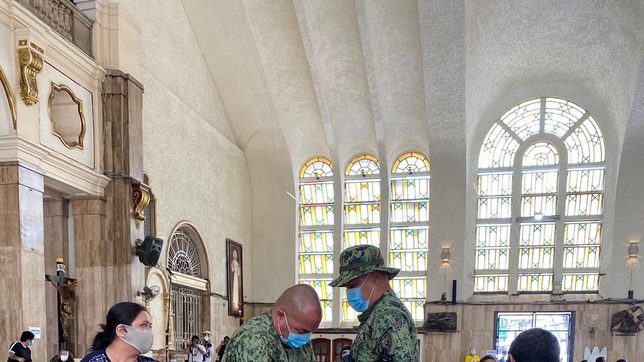 Manila police confiscated Anti-Terror Law protest materials from some Akbayan members who were attending Mass inside Quiapo Church on Monday, July 27, ahead of President Rodrigo Duterte’s State of the Nation Address (SONA).

A video posted by ABS-CBN reporter Jeff Canoy on Twitter showed at least two cops walking confiscating the protest materials – which were not being used – from people who were seated at the back.

“The bags contained placards and other materials but were not being raised nor used to cause any commotion. Policemen didn’t explain to members why they confiscated the bags,” said Macris Cabreros, Akbayan Citizens Action Party spokesperson for SONA.

Another video posted by Akbayan Citizen’s Action Party showed the cops confiscating the materials as the offertory song, “Paghahandog ng Sarili,” was being sung.

Opposition Senator Risa Hontiveros, who was among those who attended the Mass, asked Manila Police District Director Brigadier General Rolando Miranda for an explanation. Hontiveros told him that the people were not using these materials inside the church.

(I told him that we are expecting a feedback from them because the people at the back of the church just brought the placards with them. They weren’t using it. I think they just brought it with them so they can go straight to UP later. These people were not protesting inside the church.)

The party said it is ready to file a complaint against the police involved.

“Akbayan Party will continue to stand for justice and against the clear theft and disruption the police caused.”

The Department of the Interior and Local Government and the Philippine National Police had clarified over the weekend that SONA rallies are allowed at University of the Philippines campuses.

A day before the incident, PNP confiscated copies of Pinoy Weekly, a progressive community magazine that allegedly calls on Filipinos to resist the Philippine government.

These police actions against dissent came a week after the controversial Anti-Terror Law took effect.

Activists and legal luminaries said the law is unconstitutional and would embolden the government use the law’s vague terms against dissenting voices and legitimate media outlets. Sixteen petitions have been filed before the Supreme Court, challenging the law. (READ: Press freedom takes a hit in PH during coronavirus pandemic) – Rappler.com