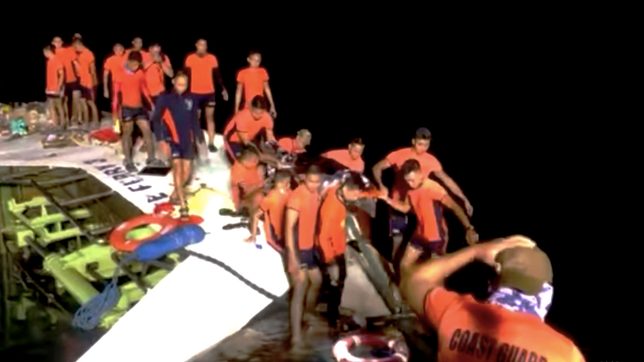 Facebook Twitter Copy URL
Copied
Fifteen others are rescued in Ormoc City. In Western Visayas, the Coast Guard is searching for nine personnel of a fishing boat that sank in vicinity waters between Tanguingui Island and Gigantes Island

The purser of a roll-on/roll-off (RO-RO) ferry died after their vessel sank off the coast of Ormoc City in Leyte, the Philippine Coast Guard (PCG) said on Saturday, September 25.

The PCG identified the death as the ship’s purser, 33-year-old  Raquel Alo, who was trapped in the MV Lite Ferry 3 when it “submerged after having trouble while conducting a docking maneuver” at Ormoc Port at around 11:50 pm of Friday, September 24.

The PCG said the vessel was already listed on its right side when they arrived in the incident area, and that they began the search and rescue operations at 12:05 am on Saturday.

The 15 other personnel of the 16-member crew were rescued, but Alo was not found immediately as she was said to be trapped inside the vessel.

Alo’s body was found after over three hours of searching.

“The PCG carefully retrieved and turned over the said body to the Ormoc City Scene of the Crime Operatives (SOCO) for proper disposition,” the PCG said.

The PCG added that Alo’s remains were brought to a funeral service provider in Ormoc City at 5 am on Saturday.

The rescued personnel were turned over to the Ormoc City Disaster Risk Reduction and Management Office (CDRRMO) for medical assistance.

The PCG also reported another sea mishap also on Friday, as a fishing boat sank in vicinity waters off Tanguingui Island in Northern Cebu and Gigantes Island in Iloilo. So far, 22 fishermen had been rescued while the boat captain and eight boat crew members remained missing.

The PCG said the FV St. Peter the Fisherman II, owned by Tristar Fishing Corporation, “sank due to strong winds and big waves prevailing at the said vicinity waters.”

The PCG said the rescued fishermen were brought to Cadiz City in Negros Occidental for further assistance.

All survivors were provided medical treatment, and were said to be well enough to return to their respective homes. The city government arranged their transportation.

The PCG said one of the survivors, Second Mate Pablito Desamparado “shared that while conducting fishing operations at around 1 am, they encountered strong winds and big waves that caused for their fishing boat to list to the port side until it eventually sank.”

The missing fishermen were identified as the following: