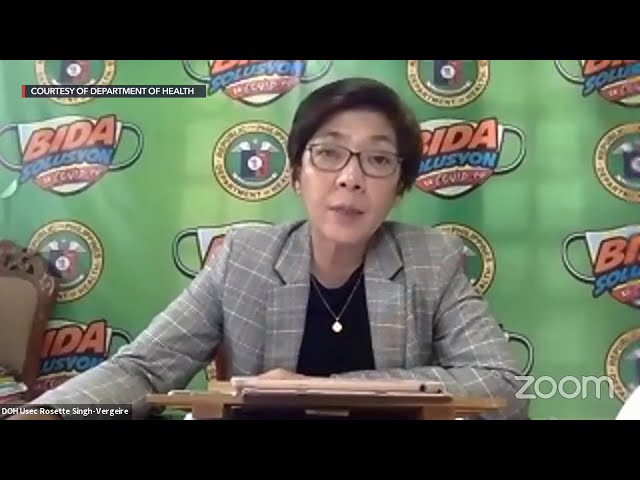 The Department of Health (DOH) said on Monday, September 7, that dolomite sand, which started filling the Manila Baywalk, could pose health risks.

“Ang [The] dolomite is a form of a rock. Mayroon pong sinsasabi sa mga pag- aaral ay kapag na-inhale po ito ng mga tao ay may mga adverse reactions, respiratory mainly (There are studies that say this can have adverse reactions mainly on respiratory when inhaled),“ Health Undersecretary Maria Rosario Vergeire said in a virtual press briefing when asked about the possible effects of dolomite sand on people’s health.

Aside from respiratory problems, Vergeire said that dolomite sand could cause eye irritation and discomfort in the gastrointestinal system.

“Kapag napunta sa mata, magkakaroon ng kaunting irritation (If it will penetrate the eyes, there will be irritation) and you just have to wash it off with water. Third, kapag na-ingest ito, it can have parang discomfort sa gastrointestinal system natin and magkakaroon lang ng kaunting pagsakit ng tiyan at pagtatae (if this is ingested, it can cause discomfort in the gastrointestinal system, and there will be pain in the stomach and diarrhea),” Vergeire added.

Vergeire, however, said the Department of Environment and National Resources (DENR) would not have given its clearance to the project if it found harmful effects on people and the environment.

“These are the minor effects of this dolomite in Manila Bay. I think with the clearance of the DENR, hindi naman ipapatupad ng DENR ‘yan kung hindi napag-aralan na (this would not have been approved if the DENR did not study that) this will cause harm to the environment and also to our people,” she said.

Despite this, Vergeire advised the public to continue practicing the minimum health standards to protect them from the effects of dolomite dust.

“When you are wearing your mask, this inhalation can be prevented also,” she said.

The controversial Manila Bay rehabilitation project made headlines last week, saying the project could result in the degradation of adjoining marine conservation areas, while others questioned government priorities during the pandemic. (READ: Is this necessary? Netizens raise concerns over white sand on Manila Bay)

Meanwhile, a non-governmental organization that monitors government infrastructure projects said the white sand project of Manila Bay is both costly and a health hazard.

Terry Ridon, convenor of Infrawatch PH, said the approved budget of the Manila Bay Rehabilitation Program (Baywalk area) was P397.897 million. He added that this roughly costs about P795,000 per meter of rehabilitating the Manila Baywalk.

As of Sunday, the Philippines has registered the highest number of COVID-19 infections in Southeast Asia – 237,365 – despite having the longest lockdowns in the world.

COVID-19, which has infected over 26 million of the global population, is mainly a respiratory disease. – Rappler.com