The Commission on Audit (COA) flagged for “inappropriate documentation” P5.3 million worth of funds released by the Department of Social Welfare and Development (DSWD) to former rebels.

In its 2020 Annual Audit Report, the COA said the social welfare department disbursed a total of P1.28 million for rebels under the government’s Enhanced Comprehensive Local Integration Program (E-CLIP), while P4.04 million were released for the Livelihood Settlement Grant (LSG) assistance.

However, the COA noted that these transactions lacked proper documentation.

The state auditors said the incorrect or the lack of documents regarding the funds turned over to 330 former rebels cast doubt on the validity of the transactions.

In particular, the government auditors said the identity of the beneficiaries could not be determined because the DSWD did not require the submission of government-issued identification cards. 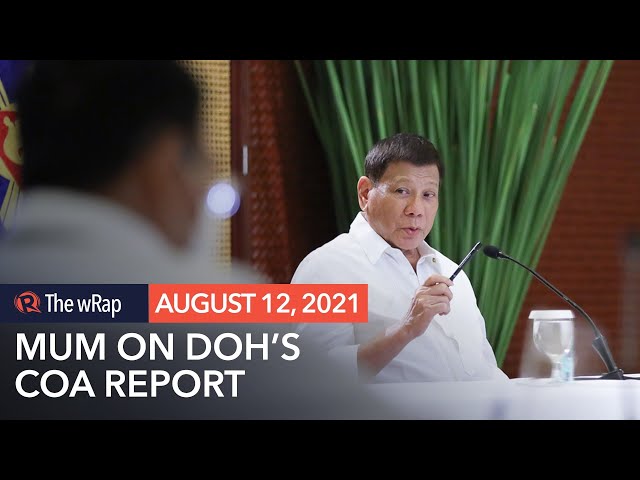 “…Disbursed Enhanced Comprehensive Local Integration Program (E- CLIP) and Livelihood Settlement Grants (LSG) Assistance amounting to ₱1,280,000.00 and ₱4,040,000.00, respectively, to 330 former rebels were supported with inappropriate and/or with lacking documentation, thereby, casting doubt on the propriety and validity of the transactions,” the COA said.

According to DSWD’s guidelines, eligible former rebels can receive an assistance amounting to P20,000 under the LSG. The recipient must be “duly certified by the Joint AFP-PNP Intelligence Committee (JAPIC), endorsed by the E-CLIP Committee, and at least 18 years old.”

For the E-CLIP, former rebels may be provided P10,000. The recipient must present their JAPIC certification and endorsement by the E-CLIP committees of their local government.

However, the COA said the DSWD only attached either a photocopy or certified true copy (CTC) of JAPIC certification as proof of the transaction. The auditing body added that the certification from JAPIC and endorsement from E-CLIP “are the only vital documents attesting the eligibility of the beneficiaries” to avail the funds. “The identity could not be ascertained through the usual and proper channel like presentation of government-issued identity cards. Thus, the original copy of the certification attesting the identity and eligibility of the beneficiaries should not be dispensed with or replaced with the certified copy of the document,” the COA added.

In a reply to the auditors, the concerned officials of the DSWD agreed to submit original copies of the certification from JAPIC and endorsement from E-CLIP to attest the authenticity of their recipients. The department would also require their accountant to “review thoroughly” all the documentations being submitted to respective agencies.

Among his campaign promises, President Rodrigo Duterte vowed to end the decades-long insurgency in the country. In 2018, he signed the Executive Order (EO) No. 70, which ordered the whole-of-nation approach to counter insurgency.

The order mobilized government agencies, including the social welfare department.

EO 70 was followed by the Administrative Order No. 10, which mandated the E-CLIP to provide complete assistance to former members of the Communist Party of the Philippines, New People’s Army, and the National Democratic Front of the Philippines, who will abandon the rebellion.

The COA has also previously flagged the anti-communist funds utilized by different agencies.

The NTF-ELCAC funds for Central Mindanao amounting to P5 million were also flagged. The COA found multiple deficiencies in the transaction, including an undocumented transfer of budget to 40 barangays. – With reports from Lian Buan/ Rappler.com