Philippine President Rodrigo Duterte has asked the Chinese Embassy to take back the 1,000 doses of Sinopharm vaccines it had donated to the Philippines.

In a public address aired on Wednesday, May 5, Duterte said this was his response to medical experts who criticized him for taking one of the donated doses despite these were not covered by the emergency use approval of the Philippine Food and Drug Administration.

(Tell Sinopharm to withdraw so Sinopharm will not be available in the Philippines so there are no more worries. Anyway, it’s just 1,000 vaccines.)

The President also said he had personally spoken with Chinese Ambassador Huang Xilian about his request for the donated jabs to be sent back to China.

Despite the overreaction, Duterte insisted he was taking the criticisms of experts as constructive.

“We are sorry. You are right, we are wrong. Sinipharm, maybe tomorrow it will be gone,” said Duterte.

Nonetheless, he spent a few minutes defending his decision to get vaccinated with the Sinopharm shot.

“I made it as a personal request. What was injected in me, it’s the decision of my doctor and all things said, this is my life,” said the 76-year-old Chief Executive.

Duterte’s vaccination on Monday, May 3, raised eyebrows because he had used a jab not yet fully assessed by the FDA and government vaccine experts. 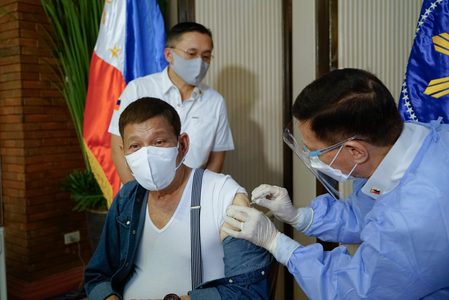 It was also only the day after when Malacañang bared that Duterte’s shot came from a previously unknown Chinese donation of 1,000 Sinopharm doses.

The Palace has not adequately responded to questions on why the President could not just have taken any of the vaccines approved for emergency use, as a way to also boost vaccine confidence among Filipinos. – Rappler.com