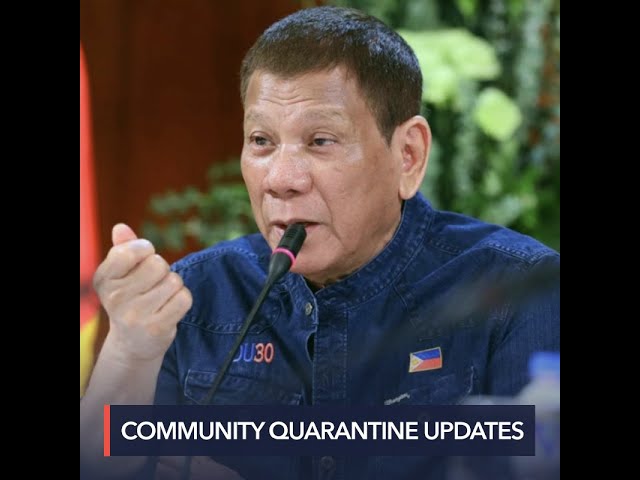 Despite the continued spike in coronavirus cases in the capital region, Metro Manila will remain under general community quarantine (GCQ) from August 1 to 15, President Rodrigo Duterte announced in a taped speech aired Friday morning, July 31.

The President said Cebu City has also been eased to GCQ, after two weeks of modified enhanced community quarantine (MECQ).

Apart from Metro Manila and Cebu City, the other areas under GCQ are Bulacan, Batangas, Cavite, Laguna, and Rizal in Luzon; Lapu-Lapu City, Mandaue City, Talisay City, Minglanilla, and Consolacion – all in Cebu – in the Visayas; and Zamboanga City for Mindanao.

The rest of the country is under modified GCQ or MGCQ.

Roque said wearing a face shield over a face mask is now also part of the minimum health standard.

Roque added that Oplan Kalinga will be strictly enforced, meaning positive patients who do not have their own rooms and bathrooms will have to be compelled to admit themselves to a government isolation facility.

The government has reopened gyms and drive-in cinemas in an effort to boost the economy.

In the same televised briefing, Finance Secretary Carlos Dominguez III said the “economy is picking up,” and that the government is ready to give Department of Health (DOH) roughly a P20 billion budget for when vaccines are available for purchase.

On Thursday, July 30, the Philippines reported a record-high single day increase of 3,954 cases, bringing the total number to 89,374.

Metro Manila had 1,703 new cases on Thursday – the highest number among areas – followed by Cebu province at 958. – Rappler.com