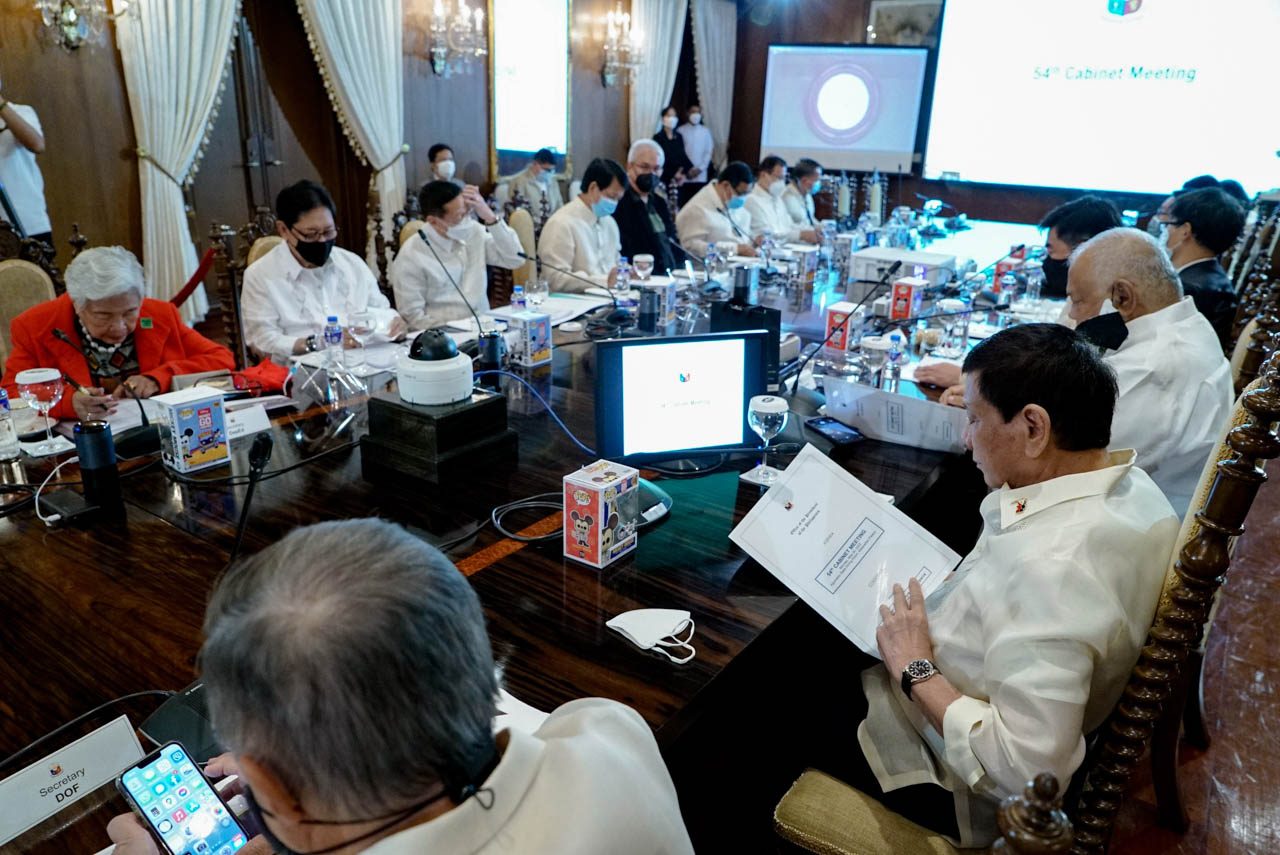 HIS LAST. President Rodrigo Duterte presides over the 54th Cabinet meeting at the Malacañang Palace on May 30, 2022. 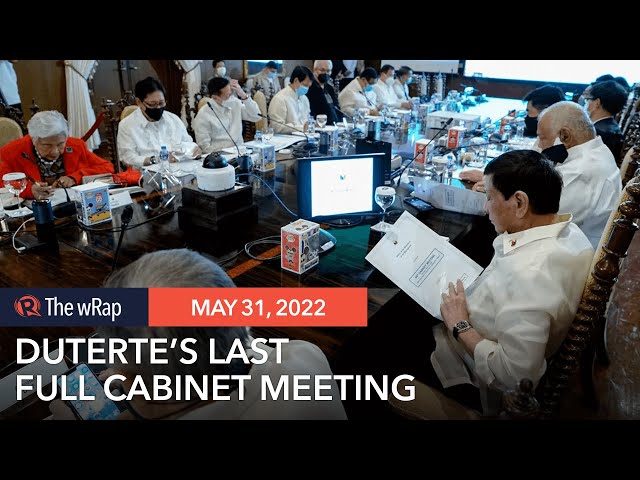 MANILA, Philippines – A mix of sadness, celebration, and gratitude pervaded the 54th Cabinet meeting in Malacañang, the last full Cabinet meeting under the administration of President Rodrigo Duterte, held on Monday, May 30, exactly a month before his term ends.

“Lungkot nga namin (We were sad),” Defense Secretary Delfin Lorenzana told Rappler on Tuesday, May 31, about the mood of Cabinet members the night before.

“But happy also for lasting that long and having accomplished a lot for the people,” he added. Lorenzana is one of the mainstays of the Duterte Cabinet, helming his department since 2016 whereas other departments saw changes in heads.

Duterte himself was “upbeat,” according to Presidential Communications Secretary Martin Andanar, but also reflective and full of gratitude for those who had embarked with him on his journey of six years as Chief Executive.

“The President thanked the members of the Cabinet for giving their time to him…. I heard him repeatedly say, ‘I didn’t make a mistake in my choice of Cabinet officials,'” said Acting Cabinet Secretary Melvin Matibag in a Tuesday Palace briefing.

Still, the Cabinet meeting followed an agenda. Cabinet clusters – or groupings of departments based on specific sectors like security, justice, economy, infrastructure, environment and climate change, and more – each presented reports, said Matibag.

Also discussed were recommendations that departments have for the incoming Marcos administration. These recommendations have already been endorsed for relaying to the team of president-elect Ferdinand Marcos Jr.

Matibag emphasized that though it was the last Cabinet meeting, the work did not stop that night as Duterte still has directives for implementation. It’s also possible that if the need arises, another Cabinet meeting could be called. Cabinet meetings under Duterte have typically taken place only once a month, unless there is an emergency.

There is no word yet if Duterte plans to meet with Marcos before June 30, inauguration day.

Cabinet members also took the time to say their thank yous. Lorenzana spoke up about how “privileged and honored” they were to serve the country under Duterte, the unconventional Davao City mayor who, six years ago, plucked them from their private lives to help him run the country.

But the night ended on a celebratory note. After the meeting, Duterte hosted a “thanksgiving dinner” for Cabinet members and their spouses. Also present was his partner, Honeylet Avanceña.

A video posted on Facebook by Commission on Higher Education Chairman Prospero de Vera III showed Duterte belting out one song for his guests, accompanied by the Philippine Philharmonic Orchestra, as Cabinet members whipped out their smartphones to document the performance.

While his longtime aide Senator Bong Go has said Duterte would be keen on giving advice to the next government, the 77-year-old President is also ready to rest, according to Andanar.

“He looks forward to retirement in Davao City and spending more time with his family and grandchildren,” said the acting presidential spokesman.

Duterte will step down as 16th Philippine President at noon on June 30, the day president-elect Marcos takes his oath as the next Chief Executive. – Rappler.com