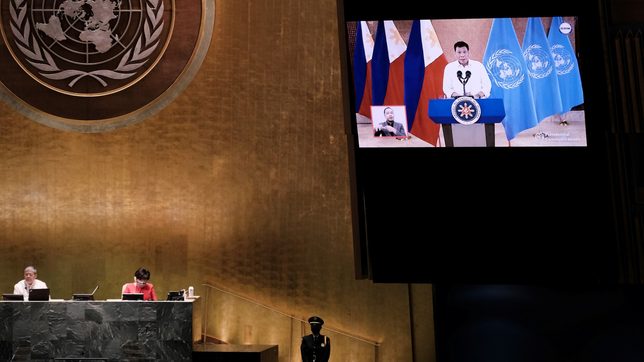 CRITICIZING THE UN. Philippines President Rodrigo Duterte speaks remotely during the 76th Session of the General Assembly at UN Headquarters in New York, US, on September 21, 2021.

Facebook Twitter Copy URL
Copied
(2nd UPDATE) 'The UN is a product of an era long past,' the Philippine President says before world leaders at the UN General Assembly

With a probe into crimes against humanity looming over him, Philippine President Rodrigo Duterte came out swinging against the United Nations (UN), discrediting it as he warned against any interference into his brutal war on drugs.

The tough-talking Duterte doubled down on his criticism of the UN in his 15-minute pre-recorded address played before the General Assembly past 5 am (Manila time) on Wednesday, September 22.

This was Duterte’s last address before the UNGA as Philippine president. It’s a speech he delivered just days after the International Criminal Court (ICC) decided to open an investigation into his bloody war on drugs.

“Mr. President, we face multiple crises that demand effective global governance. Yet, our institutions, including the United Nations, have proven to be inadequate. The UN is a product of an era long past. It no longer reflects the political and economic realities of today,” Duterte said.

He slammed the Security Council, the pinnacle of the UN structure, for being “neither democratic nor transparent in its representation and processes.”

“If the UN is to lead the world out of the many crises we face, things need to change. The UN must empower itself, by reforming itself. Therein lies the hope for humanity,” said Duterte.

The President, who has often been criticized for his parochial view of global affairs, has belittled and even threatened the UN in the past over criticisms of his violent drug war and other human rights abuses in the country.

But Duterte stepped it up a notch on Wednesday, essentially telling the UN not to impose on the Philippines as he raised the issue of human rights abuses in his anti-illegal drugs campaign.

“Meaningful change, to be enduring, must come from within. The imposition of one’s will over another – no matter how noble the intent – has never worked in the past. And it never will in the future,” Duterte said.

“How many more countries shall be made to unravel and descend into chaos before the powerful heed this simple lesson?” he added.

Duterte said this right after telling world leaders he had already ordered the Department of Justice (DOJ) and the Philippine National Police to review the conduct of the drug war.

He also said the Philippines had recently finalized its joint program on human rights with the UN Human Rights Council (UN HRC).

“I say this in no uncertain terms: The law applies to all…. Those found to have acted beyond bounds during operations shall be made accountable before our laws,” said the President.

Duterte, however, glossed over the fact that the first and second reports of the DOJ on its drug war reviews have still not been released in full. Aside from the case of Kian delos Santos, there has been no other conviction of policemen who killed suspects in their anti-drug operations. So far, there hasn’t been any complaint filed as a result of the DOJ review since its creation in June 2020.

Human rights advocates have also slammed the misstep of the UN HRC in October 2020 for only offering “technical assistance” to the Duterte government accused of widespread human rights violations. They argued the UN body could have looked at a full investigation into these violations instead.

The Philippine Drug Enforcement Agency reported that there were 6,181 persons who died during the government’s anti-drug operations as of July 31. However, data obtained by Rappler showed that there were 7,884 drug suspects killed by police from the time Duterte assumed office to August 31, 2020. This does not include the 27,000 vigilante killings outside of police operations that human rights groups have estimated.

The ICC pre-trial chamber said the Duterte government has a policy to kill, based on different information submitted by the Office of the Prosecutor.

The ICC also noted in its decision that the Philippine Drug Enforcement Agency “publicly communicated” that 5,281 people were already killed by February 28, 2019.

This means that at least 900 drug war-related deaths are no longer covered by the ICC. This number does not even give the full picture, as the Duterte government is notorious for its lack of transparency in its drug war operations. – Rappler.com