President Rodrigo Roa Duterte tends to the families affected by Tropical Storm Agaton as he visits them at the Pontevedra Elementary School Evacuation Center, Poblacion Tacas in Pontevedra, Capiz.

MANILA, Philippines – President Rodrigo Duterte on Tuesday, April 26, said he will not be attending the summit between United States (US) President Joe Biden and leaders of the Association of Southeast Asian Nations (ASEAN) since it will be held after the 2022 Philippine elections.

“Sabi ko sa kanila na pangit na tingnan kung magpunta ako doon, alam kong may bago nang president (I told them it doesn’t look good that I’ll be there as I know there’s also a new president) and besides, if it’s a working conference, there might be agreements and commitments that will be made there,” he said during a recorded address aired on Wednesday morning, April 27.

“I might take a stand that will not be acceptable to the next administration,” Duterte added. 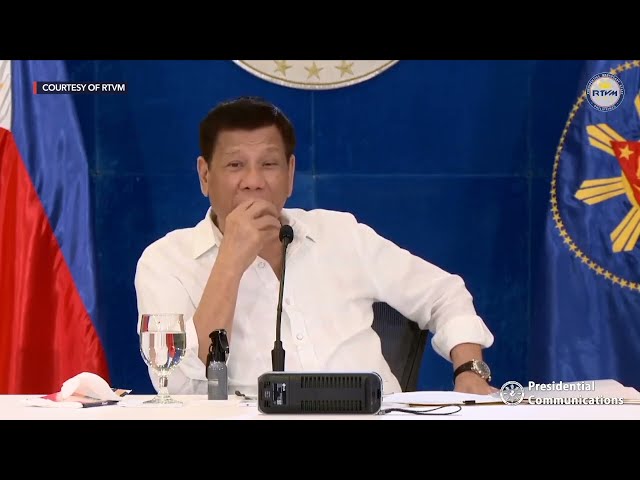 The US-ASEAN summit is scheduled on May 12 to 13, 2022, with Biden hosting the event in Washington DC, USA. The summit will happen just three days after the May 9 elections in the Philippines, and the new president would have yet to be sworn into office.

The summit was initially set in March 2022 but was postponed due to clashes in the schedules of leaders of nations, as well as the ongoing Russian invasion of Ukraine. The discussions are a follow-up to Biden’s commitment of “personally showing up and reaching out to” Southeast Asia, as he reiterated in the first US-ASEAN meet in 2021.

Duterte said he was told that the US officials wanted him to be there, but he remained firm in his stance not to go to the US “as a matter of principle.”

“Pero noon pa nagsabi na talaga ako na ayaw kong pumunta and that has been about 20 years since then, hindi na ako nagpunta ng America (I already said before that I do not want to go and it’s been 20 years, I haven’t been to America),” the President said.

Duterte’s latest statement again marks another flip-flop in his usual discussions regarding visiting the US, the Philippines’ oldest ally. In September 2021, he said he was considering visiting the US to show his gratitude for its COVID-19 vaccine donations to the country.

As of March 2022, the US has donated at least 33 million COVID-19 vaccine doses to the Philippines. – Rappler.com