Aug 5, 2015 10:00 PM PHT
Facebook Twitter Copy URL
Copied
'My mother told me, whatever preparation I do would not be put to waste because I still have years in the Senate. That's still service.' 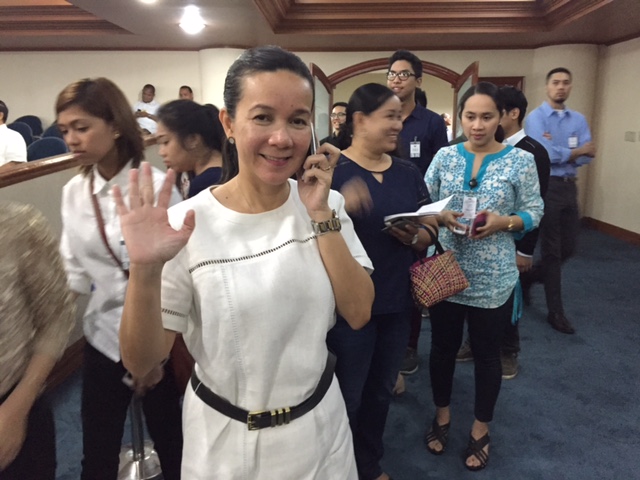 MANILA, Philippines – She may be unsure yet of the position she will seek, but Senator Grace Poe sure is preparing for 2016.

The neophyte senator – front runner in presidential preference surveys – admitted Wednesday, August 5, she is carefully working on her 2016 campaign platform, even as she repeatedly said she has not decided yet whether to seek higher office.

Poe said she wants her detailed programs and promises to be completed first before she decides.

(I am telling you that I am preparing my platform of governance, the promises to the people. Until it’s done, I cannot say…because each one needs to be scrutinized, like how I can deliver on those promises, if ever.)

Poe said she sees nothing wrong with this. After all, she said, whether she runs or not, she still has 4 more years in the Senate.

The neophyte senator said people from various sectors are helping her understand the different issues.

(My mother told me, whatever preparation I do would not be put to waste because I still have years in the Senate. That’s still service. But, to be frank, many people are helping me understand the true state of our country – professors, businessmen, agriculture sector, and even from the environment.)

Even if she has not declared plans to run for higher office, Poe already faces allegations of being a drug addict, a drunkard, and an abusive employer.

While Poe admitted she drinks on social occasions, she dismissed the allegations. The senator said she is confident the truth will eventually come out.

(You know what, I’m saddened by those [accusations]. Abusive, drunkard, underwent rehab – they’re throwing everything and many more will come out. You know if truth is on your side, I don’t fear those issues.)

The senator maintained she will not back down and is intent on preparing for the legal battles ahead, referring to the citizenship and residency issues being thrown at her. – Rappler.com