Festive mood as Poe supporters flock to UP MANILA, Philippines – The rain did not dampen the mood of supporters of Senator Grace Poe, who all flocked to the Bahay ng Alumni at the University of the Philippines on Wednesday, September 16.

Poe on Wednesday evening declared her bid for the highest post in the 2016 elections. (READ: Grace Poe: I offer myself as your president)

Among the first to arrive were supporters from the Filipinos for Peace, Justice, and Progress Movement (FPJPM) and those from Parañaque wearing purple shirts that read “Ampunin si Grace Poe” (Adopt Grace Poe).

FPJPM President Boots Cadsawan said 150 members were present on Wednesday, and some of them came from as far as Nueva Ecija and Mindanao.

FPJPM was the group that organized at the grassroots for Poe’s father when he ran for president in 2004. Cadsawan said the mood was “different” on Wednesday compared to when FPJ announced his candidacy.

“Tingin ko hindi niya sisirain yung pangalan ni FPJ at saka sana ituloy niya yung hindi [nagawa] ni FPJ, ipagpatuloy niya sana…. Wala namang ibang magtutuloy kung hindi siya lang,” he told Rappler. (I think she will not ruin the name of FPJ and I hope she does what FPJ wasn’t able to do. I hope she continues…Nobody else can continue it except for her.)

As the hours went by, more people from Bicol, Valenzuela, Nueva Ecija, Malabon, Parañaque, Muntinlupa, Mandaluyong, and Montalban, Rizal arrived to show their support for the senator.

Groups such as All for Grace, Bagong Umaga Bayan Movement, Aksyon Demokratiko, Changemovers, and Anti-Crime and Poverty International Foundation Inc (ACAPIFI) were also in attendance. 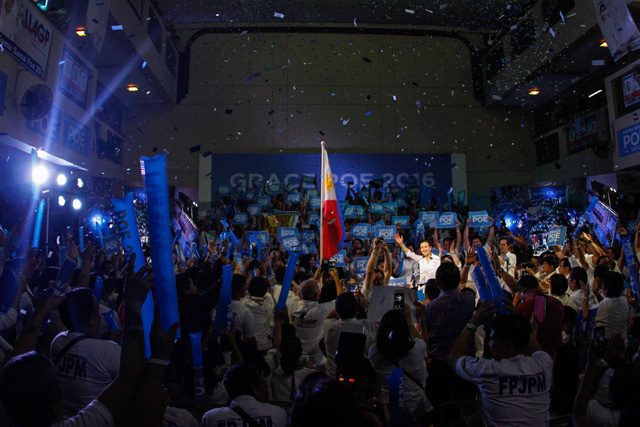 Seats were quickly filled up inside the main hall of Bahay ng Alumni, so many supporters waited outside and watched the event from two outdoor screens set up by organizers. There was music and dancing to entertain supporters who waited under the rain.

The crowd was a mix of young and old. One of the groups that arrived early was the Bicol Youth For Grace, a group composed of 31 young people from different youth organizations in Bicol. 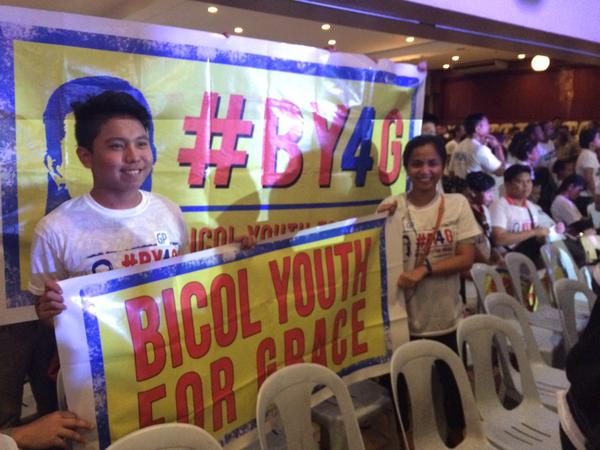 (In Bicol, more or less 50% or 40% of the youth sector vote so we really have a big role to play in voting, and we really want to know what Grace Poe’s real intentions are.)

“Bilang kabataan, nakikita ko ang future namin sa kanya at gusto namin na magkaroon ng totoong tuwid na daan sa ating bansa,” he added. (As youth, I see our future in her and we want to have a real straight path in our nation.)

Gerome Castillon, national director of ACAPIFI, said Poe, with her “heart for the masses,” has the qualities of a true leader of the nation.

(When we elect a rotten president, nothing will happen to us… Our objective is good governance, our objective is the real straight path, not the fake one.)

The anti-crime and poverty group has at least 18,000 active members all over the country. Members of the group helped as volunteers during Poe’s senatorial campaign in 2013. – Rappler.com