Facebook Twitter Copy URL
Copied
Re-electionists and Senate returnees would be elected to the Senate if elections were held today, according to the latest SWS survey

MANILA, Philippines – If the 2016 national elections were held today, the top 6 senators would be familiar names: re-electionists or returnees, according to a Social Weather Stations (SWS) poll.

The survey, conducted September 2-5, 2015 puts incumbent senator Vicente Sotto III at the number 1 spot, with 54% of respondents saying they would vote for him had elections been held on the day they were polled.

Joining Sotto in the “top 6” are the following:

Both Lacson and Pangilinan also served as Cabinet secretaries under President Benigno Aquino III but have since resigned.

The only new name to break the monotony of re-electionists and returnees is Justice Secretary Leila de Lima, who ranked 7th with 33% of respondents saying they would vote for her. 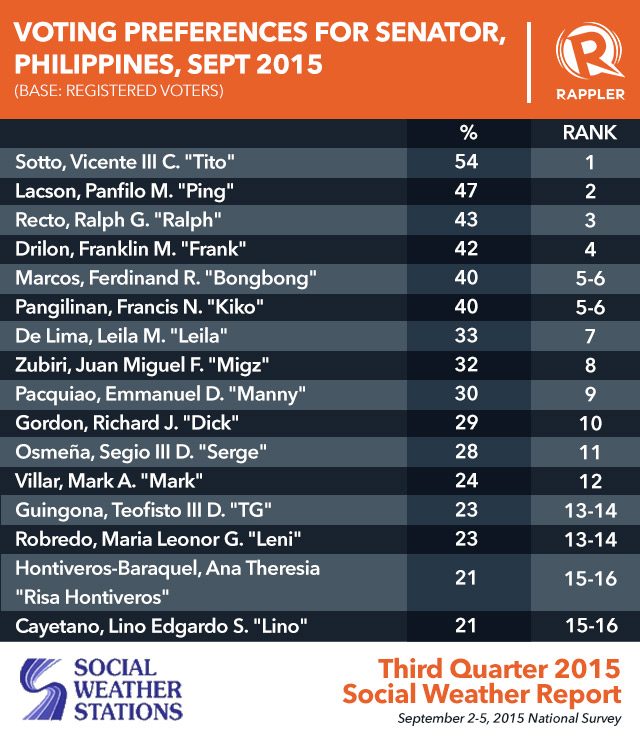 The 5 other names in the “magic 12” include Senate returnees, a boxing champion turned congressman, and the son of a former and incumbent senator:

The survey made respondents pick 12 senatorial bets from a list of 44, and was conducted after the anointment by President Benigno Aquino of Roxas as his preferred candidate, and a few days after the Iglesia ni Cristo (INC) staged a nationwide protest against the government’s alleged overreach into its internal affairs.

The local church, known to exert its influence on local politics, wanted De Lima’s resignation and the dropping of serious illegal detention charges against its top ministers.

After almost 5 days of protesting, the INC abruptly stopped its protest after discussions with government. De Lima did not resign and the case pending before the Justice Department is set to undergo the usual process.

De Lima said it was “heartening” to know her rank in the SWS poll, but insisted she wasn’t “100% sure” of a Senate run up until the ruling Liberal Party (LP) officially announces its slate next week. Just outside the “magic 12” are incumbent senator Teofisto Guingona III and Camarines Sur Representative Maria Leonor “Leni” Robredo, who are tied for the 13th and 14th spots with 23 percentage points.

Weeks after the survey was held, Robredo was offered the vice president position by the ruling LP.