Bongbong Marcos seeks NUP support: I will try to unify the country 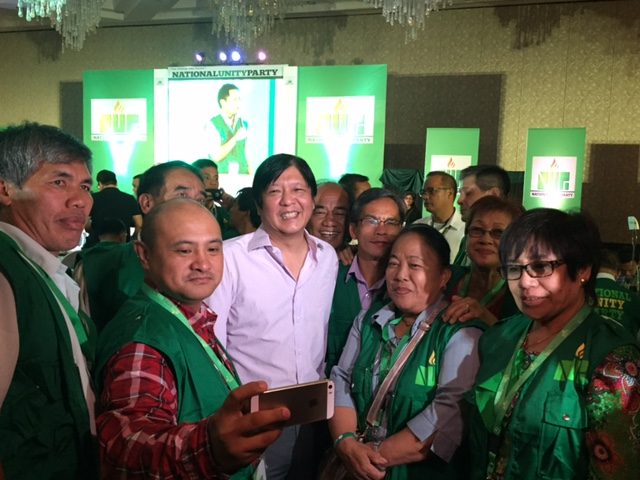 Facebook Twitter Copy URL
Copied
While Marcos says he meets with other individual candidates and political parties, he says his talks with Binay are almost done

MANILA, Philippines – Despite being coy about his political plans in 2016, Senator Bongbong Marcos attended the national convention of the National Unity Party (NUP) on Monday, September 28, and sought the party’s support.

Marcos, the only undeclared candidate among the invitees, received the warmest reception from some 500 NUP members, followed by administration standard-bearer Manuel “Mar” Roxas II and Vice President Jejomar Binay.

Without saying anything definite, Marcos said he is out to unify the Philippines, which he said has been “polarized” for so long now.

While NUP was only established in 2012, Marcos said some of its members have already supported him in the past.

“Even if I belong to another party, I feel very at home. Marami sa inyo ang kaibigan (Many of you are my friends). Thank you also for this invitation, I would like to say I enjoyed the support from many of the individuals of the group here,” he said as he started his 15-minute speech.

Asked if he was referring to Aquino in his speech criticizing the government’s seemingly “polarizing” and “adversarial” type of government, Marcos said: “Yes. This seems to have slowly crept into our political system. It has become a part of governance already and that I think is not good. We need to remind ourselves we are not fighting each other…. Kung sino ang kapwa Pilipino, hindi sila ang kalaban, kung hindi sila ang iyong kakampi (Our fellow Filipino is not the enemy, he is the ally).”

He also took a swipe at the Aquino administration for the supposed lack of infrastructure development, saying the next government would have to improve on this.

“The next government in 2016 will have to make a priority that the infrastructure development that has been left behind by this administration will have to catch up. There are issues fundamental to the progress of our country,” Marcos said.

The filing of the certificates of candidacy is only about a couple of weeks away, but Marcos seems not in a hurry.

He admitted his camp had been talking for months now about his possible bid for a higher post.

“No preference [if president or vice president], one way or the other. I’m studying both options,” he told reporters in an ambush interview.

Binay, a human rights lawyer during the Martial Law period during the time of the senator’s father President Ferdinand Marcos, has invited Marcos to be his running mate.

While Marcos said he had met with other individual candidates and political parties, he said his talks with Binay were almost done.

(Our talks are almost done. At the moment it will be done, we will announce the agreement and what position I will run for.)

Marcos said he is set to announce his definite plans by next week. – Rappler.com