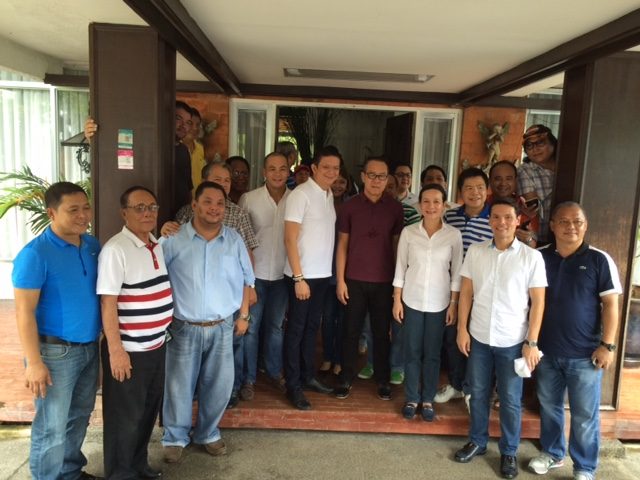 DANAO CITY, Philippines – A local political party allied with the ruling Liberal Party in 2013 met with the tandem of senators Grace Poe and Francis Escudero on Thursday, October 1.

The Bakud Party, led by the Durano family of the 5th district of Cebu, hosted the lunch for Poe and Escudero in their posh home in Danao City.

(We all saw the charisma of Senator Grace and Senator Chiz. And then the mayors, our vice mayors, and barangay captains got excited with the opportunity to meet them.)

While their party and family have yet to decide whom to support in 2016, Durano said he is “personally satisfied” with the platform of Poe and Escudero.

Poe, for her part, welcomed this and thanked the party for extending their invitation to them.

(I am thankful to the party. Of course, this is a big thing to any candidate, but, more than this, you should also trust in the advocacies of your companion.)

The Duranos and subsequently their Bakud party merged an alliance with the LP for the 2013 elections.

In fact, Durano ran for Congress and won a seat under the LP, even as he told reporters he was “never an LP.” At present, Durano is the provincial chairman of the Nationalist People’s Coalition, the second largest political party in the country.

Now, they are likely to leave the coalition in time for 2016. While they already endorsed LP bets Hilario “Junjun” Davide III for governor and Agnes Magpale for vice governor, they remain mum on their presidential bet.

Asked if he has discussed the issues with the neopyte senator, Durano said there were no mentions of the past in their talks.

“You’re in office not for yourself but for your constituents. It’s a big advantage if you’re with the administration because they’re the ones in power who can give benefits to your constituents,” the vice mayor earlier said.

While the party’s reception to Poe and Escudero was warm, Durano said they are still open to other presidential candidates.

Bakud party’s gubernatorial bet Davide earlier called on the party to support administration standard-bearer Manuel Roxas II, but, days after that, the party met with Poe and Escudero.

“It’s open season..Siguro di na kailangan ng invitations kasi yun na ginagawa nila reaching out, (Maybe no need for invitations because that’s what they do, reaching out)” he said.

Asked what will happen to their alliance with LP, Durano said it all depends on who the party would support.

(It’s a different elections. There are different candidates now and we have to assess each candidate. It depends on who we will support.)

Durano said his district is the second vote-richest district in the province. He said 1,587 of a total 1,789 elected local officials belong to their party. – Rappler.com